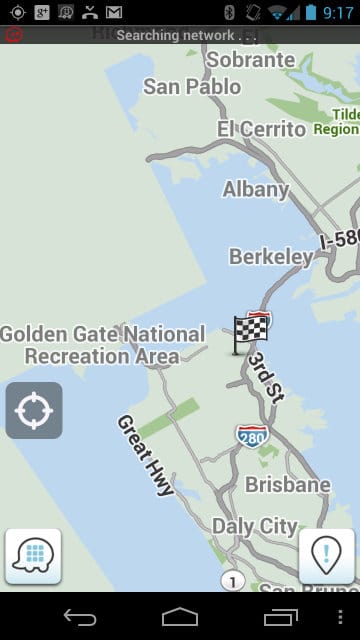 Bingo! I read this morning that users are experiencing GPS issues on the unlocked Samsung Galaxy Nexus sold direct by Google (i9250) running Android 4.1.1 (Jelly Bean). Some report they can’t connect to satellites even when several are within clear line of sight. Instead the dreaded “Searching for GPS” message comes up, rendering phone location-based services like Foursquare and Yelp, and navigation apps such as Waze gasping for crowd-sourced air.

This is exactly the issue I’ve been experienced over the past week or so with Gnex.

Not so stellar, but at least it’s good to know that I’m not alone. Hopefully an official fix will come soon. There’s nothing more frustrating than waiting, and waiting, and waiting for satellite lock when you’re trying to get nav directions to get to a meeting. In the Bay Area, I’m sunk without it. I could be in Portola Valley one moment, and then need to shoot up to the financial district in SF before heading north to a winemaker meeting in Napa. Do that a few times and you realize: (a) GPS and nav are essential; (b) Bay Area traffic is an affront to the very word “motion”; and (c) Pandora is a necessary travel companion.

GPS does in fact work on the Google Nexus with Jelly Bean. It just can take a long time to finally connect, and when it does it can often by erratic. At first I thought it was failing because of my indoor location. Or maybe it was the San Francisco fog. Or the clouds rolling in across the San Jose foothills. Turns out in fact that I found one (small) feature that still works better on my trusty OG Droid (2009).

Android Central has a quick fix. By toggling “Google’s location service” in the GPS settings off and then on again all should be right with the world. I’ve done this before, and it usually helps, but not always.

Those running Ice Cream Sandwich, anxiously awaiting a JB update, can at least take solace in the fact that us early ones are taking one for the team.

This hiccup aside, life with Nexus and Jelly Bean has been brilliant – especially considering this smartphone is coming up on its 8 month birthday. Upgrade decisions can be tantalizing what with so much Android firepower out there. If you’re considering the Galaxy S III I urge you to also add the unlocked Nexus to your short list (Read: 7 reasons why you should go Nexus GSM/unlocked). You might be surprised to discover how fluid this Android has become, and how far ahead it is — 4G, larger screen, customizable widgets, best-in-class notifications —  relative to Apple’s iOS.

Update: Wouldn’t you know it, when I tried Nav this morning it locked on a satellite almost instantly.