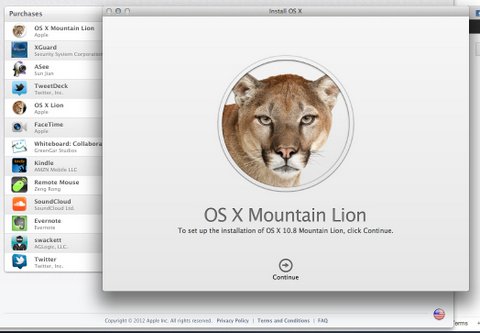 Mobile is king. Want proof? Look no further than Apple’s Mac OS X Mountain Lion update, and Microsoft’s forthcoming Windows 8. While the latter will be a far more dramatic jump in this new post-PC universe, my MacBook Pro continues to look more and more like a quasi iPad/iPhone (albeit far more powerful).

No doubt like hundreds of thousands of others I upgraded to Mountain Lion this morning. Weighing in at 4.34GB, the download took just over an hour to download, and about thirty minutes to install; nary a hitch. I like that Apple is again releasing this via the App store, and that the install process is about as smooth as it gets.

The $19.99 price tag further affirms the declining value of operating systems in favor of the value perceived by apps. Eventually, like its mobile iOS counterpart, I expect the Mac OS to also be free. Long-term, this is a platform play, and battle for share. Seed it (with quality), and they (developers, users) will come.

I needn’t go into all the new features (some 200 of them apparently); plenty of web sites are doing exhaustively intense reviews and first impressions. Rather, this is just one guy’s take on the new OS. Note that I’m neither firmly entrenched in the Apple camp or the Google camp. I don’t see the world that way. What’s most important to me is using the best tool for the job. I learned as much after completing another patio tiling project this summer… want to remove excess grout? There’s a tool specifically designed to do just that, and it works far better than any other alternative.

Microsoft, on the other hand, has chosen the Hail Mary. Windows 8 could very well make or break the company. Mountain Lion, meanwhile, will dutifully serve the faithful.

When it comes to laptops, I went Apple. Build quality was one reason. The display was the other — Apple wins in that regard big time. Retina is further evidence that Cupertino knows how to innovate when it comes to screen resolution. Contrast on the MacBook Pro is outstanding. Blacks are black, and whites are white. Dim grays and fuzziness, so common among ultrabook competitors, are no where to be found. I did not, however, go Mac because of OS X. It may say dull to say, but Win 7 suits me just fine. Window management — moving windows around, switching between applications — is far easier on Windows, which is one reason why I use Win 7 in the office and in our editing bay.

But when it comes to smartphones, I went Android. There’s no way I’ll go iOS. Apple’s notification system is the pits. Android walks all over it. And given the amount of information coming at us these days, it’s nice to have Nexus keep me updated in a seamless fashion as to what’s happening with my email, schedule, social networks, news items, etc. Further, the iPhone doesn’t support 4G, only comes in one small size, and is unfortunately tethered to the notoriously unstable, frustrating iTunes software.

Well, it’s not bad. Ho-hum might be an apt descriptor.

Die hard Apple users will likely love it, and bask in all its new features. After rebooting the MBP I couldn’t see much difference (then again, the same held true when I recently upgraded the heroic Google Nexus to Jelly Bean).

There’s a new notification bar. However, that will be of limited use to those of us that are big time Google-ites and regularly us Gmail, Google Calendar, Google+, etc. For those that have adopted Apple’s ecosystem and run Facetime, the new Game Center, Safari, Apple Mail, then this could be helpful. Me? I’m just trying to figure how to switch it off.

Not much from what I can tell.

Assuredly there’s plenty of improvements under the hood. New features will likely expose themselves over the coming weeks as I spend more time with the upgrade. I’m not one to search for new features, or visit Apple’s web site, and make a check list of new things to try. I just do my work, merrily. So far all seems to work quite well. Browsing with Google is as fast as ever. The file system looks the same. There’s no visual changes so far as I can tell yet, aside from the inclusion of the aforementioned notification menu.

That not much has changed is not necessarily a bad thing. Why rock the boat? Mountain Lion instead is another step in the evolution of a desktop OS that is bursting at the seams trying to figure out how to become a post-PC, quasi-tablet OS. I think it’s succeeding, even if there isn’t much sizzle in this latest result. Microsoft, on the other hand, has chosen the Hail Mary. Windows 8 could very well make or break the company. Mountain Lion, meanwhile, will dutifully serve the faithful.