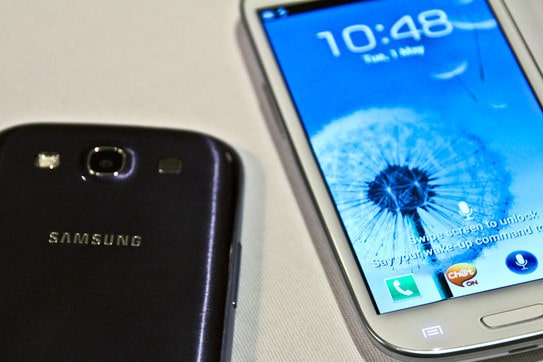 It’s a day later. The hands-ons are in, the first impressions are in, and so are many of the verdicts. How then does the new much-hyped and much-anticipated Samsung Galaxy S III flagship Android fare?

I, too, anxiously awaited the London launch. My aging Motorola OG Droid is way, way beyond due for replacement now, and I’ve steadfastly (okay, stubbornly) been holding out for the next great thing. So far the short list of potential upgrades looks like this, in order: Samsung Galaxy S III (the S II was, and still is, an epic Android), HTC One X (HTC’s comeback is an impressive package), and Motorola Droid Fighter (we don’t know much yet about this upcoming Moto flagship). Ironically, the more I think about it, the more the Galaxy Nexus doesn’t look like too bad of an option either!

On a poll on Phandroid, the majority (57%) voted that the S III announcement “fell short of expectations.” Also, in a feature poll on the same article, “Wireless Charging” was voted hands-down favorite feature (mine too) with “Smart Stay” a distant second.

Pocket-lint, who prefer the white version, had this to say in their review of the Galaxy S III:

“Samsung has created a powerhouse of a smartphone, one that can truly make claims to being a portable computer in your pocket. We’ve seen enough to know that iPhone 4S fans will be sick with envy.”

PC World notes that while the 4.8-inch display is nice, because there is no boost in resolution, the effective pixels per inch decrease, as compared to the iPhone 4S, HTC One X and Nokia Lumia:

Despite their big and bright screen, Samsung Galaxy phones don’t match the pixel density of the iPhone’s Retina Display (326ppi), for which the phone has received continuous praise. Actually, the bigger the screen got, the lower the PPI count was; for example, the Galaxy Nexus has a 4.65-inch, 1280-by-720 pixel display with 315ppi, while the S III maintains the same resolution for 4.8 inches, taking the density down to 306ppi.

Regarding the new Exynos quad-core chip, Slashgear has some benchmarks and says it’s a “streetfight” between the S III and HTC One X.

Meanwhile, Gizmodo is not buying any of the hype, and today declared the HTC One X the best Android phone right now.

You could argue that the HTC One X is better than the iPhone 4S. Yeah, you heard that! The screen is most definitely better, the rest comes down to personal preference. Also, at $200 on contract, this thing is a steal.

I would concur. It’s better than the iPhone 4S, as is the S III for that matter. I prefer the bigger screens, the power and flexibility of ICS over iOS any day- some of that could change come fall with the iPhone 5 announcement.

So far, I’ve yet to find an out-and-out, glowing review of the S III. That could be simply because the reality could not match the hype, which built for the better part of 6 months – or maybe it built the day after the S II launched.

If you’re in the market for an Android upgrade you’ve got some time to research some more before the Galaxy S III hits U.S. shores, and by then it will likely ship with a dual-core LTE compatible chip, which is one more reason why either the HTC One X or even the Samsung’s own Galaxy Nexus could be better choices.