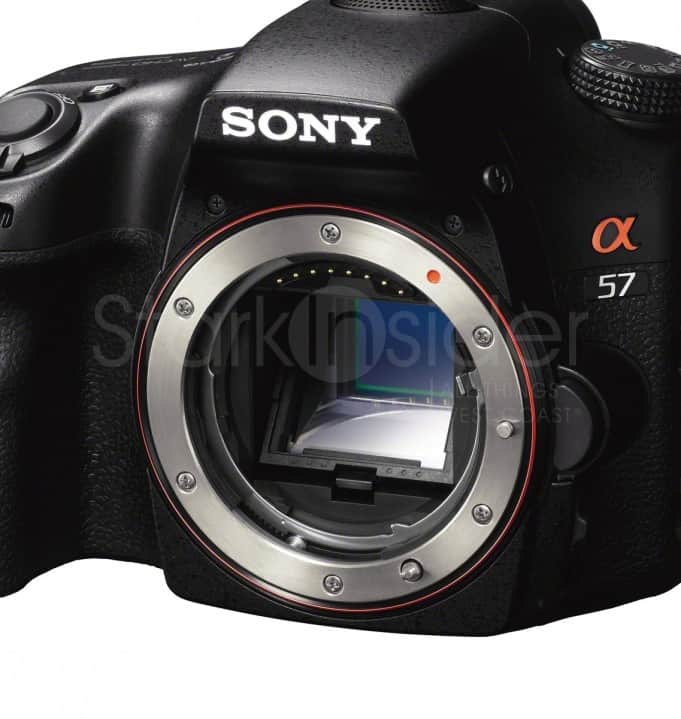 The new Sony Alpha a57 DSLR lands next month. How does it compare to the Canon EOS 60D, and – most importantly – which is the better camera?

I’m a multi-generational Canon guy. You know how that works; your grandfather passes down lenses, a TL1 , an old camera bag, and then your father teaches you the ropes on an AE-1. Lickity split, I’m a Canon guy. It could’ve just as easily been Nikon. Likely I’d be happily snapping away, adjusting stuff in Lightroom and endlessly cutting in Premiere Pro.

Sony is trying to change that. I like their approach. Rather than play by the existing DSLR rules, the new Sony Alpha a57 seeks to change the game. The new model hits stores next month for $799 with 18-55mm kit lens (Sony has a preorder page now up). It’s not a DSLR in the conventional sense. There is no optical viewfinder. Instead, Sony uses an impressive sounding electronic version. Couple that with mirrorless action (“translucent mirror technology”), and you have an interesting alternative to the conventional models out there such as the T3i, 60D, and Nikon’s D5100.

There’s a few things that immediately grab my attention with the a57.

The a57 can shoot much faster than my EOS 60D: 10 fps. vs. 5.3 fps. Ouch, that’s a big difference. If you’re into sports photography or have mere seconds to capture a subject, then the Sony could give you a leg up.

The a57 performs better in low light. I often shoot at events – film festivals, foodie events, inside theaters – where light is sparse. Flashes to me are the enemy; almost more so than complete darkness. I don’t like the artificial look they typically create, and carrying extra gear is a pain. The a57 tempts with its impressive (at least by the specs) ISO limit of 16,000. Holy smokes. 60D maxes out at 6,400. Until the in-depth tests come out, however, we won’t know for sure what kind of quality we can expect from the a57. On paper, though, this is a win for Sony over Canon.

The a57 has an intriguing auto-focus mode that enables the camera to lock on a subject. This is a new feature we’re seeing more often in DSLRs (Nikon D3100). In the past, the lack of auto-focus in video mode was perhaps one of the main reasons why video camcorders were the preferred choice for shooting non-film based projects (where you don’t have the benefit of stopping and pulling focus, and editing in post). Also, with 15-point AF the a57 beats the 60D’s 9-point system.

Other things I like are the video-specific video light Sony is making available as an accessory (I believe for around $170). Also,like the 60D, the LCD articulates, which is tremendously handy for those moments when you feel the need to go Tarantino framing your next shot.

You can see here in this segment I shot with the 60D that I actually try to use the lack of auto-focus to my advantage- “It’s my style, man!” (said with carefree Neil Young drawl). Results are admittedly mixed!

I prefer Canon’s mov format for video over the a57’s AVCHD which has given me problems in the past (from a Vixia camcorder in Premiere Pro).

Specs are one thing, and don’t necessarily translate into market share (i.e. iPad vs Android Tablets). I’ll be keeping my eye on dpreview.com (they’ve already published an informative a57 preview) to see how if real world performance delivers.

For now I’m still a Canon guy. That’s unlikely to change anytime soon. Not for ideological reasons mind you. When you have decades of investment – glass, know how, accessories – changing camps is never a decision to take lightly. With the a57, Sony is pushing the envelope, and stirring up the DSLR pot.