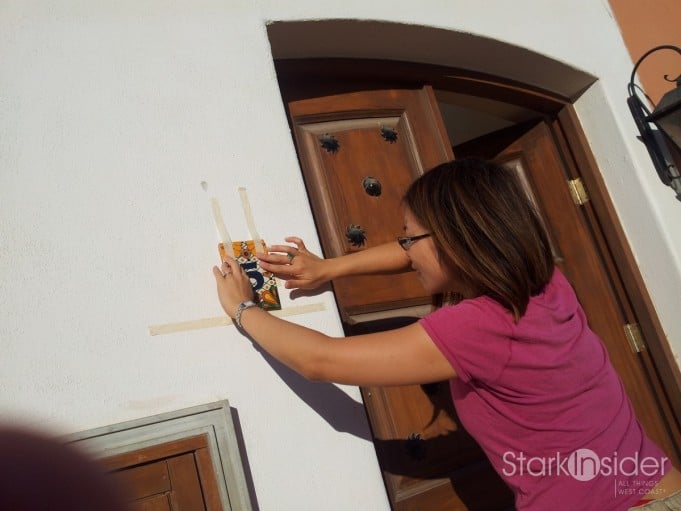 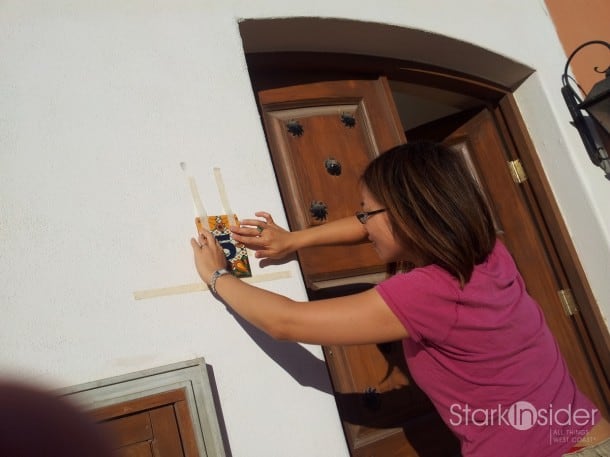 The secret it out. Yes, the little Casa Del Lagarto Azul has “secret” blue lizards.

We spent the better part of our last evening here in Loreto Bay installing them on the casa, along with house numbers. Because we’re working here, we had to do this project at the end of the day, as the sun quickly sunk beyond the Sierra de la Giganta across Highway 1 to the East. That didn’t stop Loni from furiously mixing mortar. After all, good karma follows good mortar.

Although we took possession in 2009, putting “25” onto the casa somehow makes it feel more like a home. We have an address; a place to welcome friends and family here in the Baja California Sur.

The adventure started in 2006, when this place was just acres of dry desert, and dirt. Location-wise you couldn’t ask for anything better. Jacques Cousteau famously called the Sea of Cortez “the world’s aquarium.” So blue that water, so sparklingly and so full of sea life that it has been known to cause goosebumps.

Those that have been following our Loreto updates through the years (541 posts wouldn’t you know!), will know the ups and downs we buyers experienced. In 2009 Loreto Bay almost died. When the builder, the Trust for Sustainable Development (“TSD”) went bankrupt, everything on the ground stopped. Rebar jutted to the sky. Slabs dotted the development, some located next to completed homes. All told, the development fell well short of its goal of a multi-phased, multi-decade project that would include some 5,000 homes. At that point Loni and I thought it was over. The investment completely lost. If security were to pull out, the lizards would take over our homes, and Loreto Bay would become a wasteland. An amazing thing happened, though. While Donald Trump’s development went bust, up in the northern Baja state, Loreto Bay home owners refused to let the dream die without a fight. We banded together. Strong leaders emerged. We realized we had incredible skills among us – lawyers, accountants, doctors, artisans, technologists. We created a social network so we could stay in touch. 800 of us — from Calgary to Vancouver and San Francisco to London — banded together. The home owners, through a long, hard fought process, gained control of the development. We would hire the builders to complete the homes. We would work with local and state government officials to ensure the area was developed safely, and with the interests of all those involved well represented. And we would not let it fail. Loreto Bay emerged from the downturn stronger than ever.

So, three years later, when we do a silly little thing like attach house numbers to a casa, it means much more than just a lot number.

The story will continue. Catch up if you will. There’s more to come…