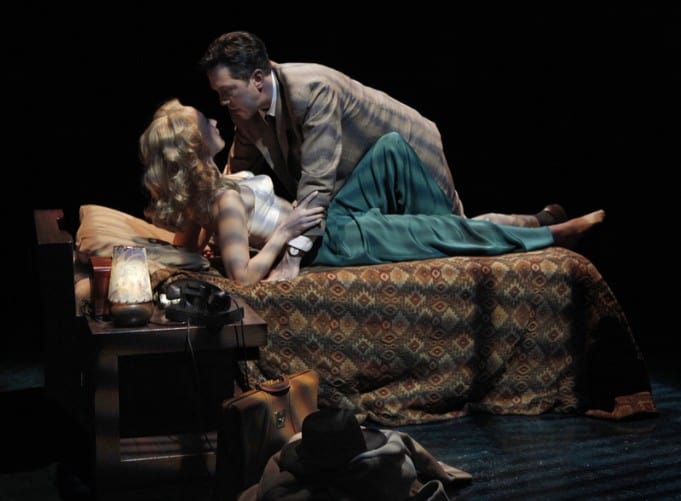 San Jose Rep’s season turned bold this week with the world premiere of Double Indemnity. Based on the classic 1943 crime novel (later turned into a hit film), noir scorches the stage. Heavy on style — costumes, set, lighting — and well paced it’s a delicious way to spend two hours. Strolling down the rain-soaked Paseo de San Antonio to the Rep, I wondered if I was in for a staid adaptation, the kind where sets are predictably boxy, and lines are delivered with campy 1930s gusto. However, the minute scheming insurance agent Walter Huff (John Bogar in an dynamic, entertaining performance) appears, gasping and bleeding, at the bow of a luxury liner I knew this was going to be anything but dull.

At the heart of this web of betrayal is seductress Phyllis Nirlinger (Carrie Paff oozing playful sex appeal). She orchestrates her husband’s murder, disguising it as an accident by staging his fall from a train (which pays double indemnity). Nirlinger is the blueprint for the modern day femme fetale (Sharon Stone, Basic Instinct beget Kim Novak, Vertigo). Striking, curvaceous, she woos men with the bat of an eye, and slinky step. It’s not long before Huff, making an insurance house call, is pining for the married blonde and eager – after a cigarette and shot of bourbon – to unfurl the masterful plan.

Well, almost. Except one problem: never bet against actuarial tables. Insurance investigator Keyes (Richard Ziman with zeal to spare) has seen “a million” of these cases. In the second act, the scheme unravels, but not without at least one or two twists. There is flirtatious daughter Lola Nirlinger (Jessica Martin) who harbors revenge; and her mysterious boy friend (Mark Anderson Phillips, always reliable).

In addition to the strong acting, scenic design (Thomas Lynch) is another stand-out. A large triangular structure juts out across from the center of the stage. Panels move vertically and horizontally to reveal apartments, living rooms, offices. At first I thought it was a bit much; this is a large piece that dominates the stage. But it’s actually genius, and allows the play to flow without breaks for set changes. Dare I say it’s like watching a high tempo hockey game where players make line changes on the fly. The action keeps on coming! Tip of the fedora to Kurt Beattie for inspired, innovative direction.

This co-production with A Contemporary Theatre (ACT) of Seattle proves beyond a reasonable doubt that Double Indemnity works as a play. All the hallmarks of a classic noir are here, right down to the dancing shadows, the smoke-filled rooms, and after hours stealth. That SJ Rep had the “audacity” to insert this modern re-imaging into their season is a real treat and a (train) ride not to be missed.