The wine blogosphere has exploded. By my guesstimate the number of wine blogs grew steadily in 2010, before exploding in numbers in 2011. Today there’s probably at least 300 wine blogs, though there could be far more. Google returns 508,000,000 results for “wine blog.” And you wonder why curation is so hot these days.

Along the way segmentation emerged as a trend, just as it has in other spaces (i.e. Android blogs). Since generalists aren’t long for the blog rankings, we began to see sites focused on price points (Good Wine Under $20), on specific regions (Virginia), anything but specific regions (The Other 46), and even favorite grapes.

One thing I love about wine writing is the varied perspectives and angles oenophiles choose to approach a topic. Some are technical, some emotional, some combative. As is typically the case in the meritocracy that is the Internet, the ones that rise are the ones that manage to entertain and educate on a regular basis. It’s tougher than it sounds.

There have been a few casualties along the way, for a variety of reasons. Jeff Lefevre, the quality voice behind Good Grape is taking a break. Gary Vaynerchuk shut down Wine Library TV to apparently become a social networking version of Tony Robbins. Ryan Opaz of the well regarded Catavino blog which chronicled Spanish and Portuguese wines also signed off.

If my spidey senses are tingling it’s because I feel as if we’re on the verge of a shakeout. Wine is one of the hardest topics to consistently blog. At the end of the day, there’s really only so much you can say about farming and agriculture that will appeal to mainstream audiences. News is slow to come by too. If only Lindsay Lohan would take her benders to Napa instead of Vegas we might have something. Heck, if she brought Demi along we might even have the makings of a Thelma & Louise style homage to Sideways. Might. Check back with me on that.

Cars, tech (especially Android and Apple), film, and food are all far easier than wine in my estimation. Only theater — and this strikes really close to home, having covered the SF Bay Area theater scene now for almost three years — is a tougher subject matter to cover than wine; and because of theater’s regional nature and the short shelf life of a performance, it’s even worse in terms of attracting large audiences, not to mention the long commutes (Hello, Prius) required to get from theater to theater. 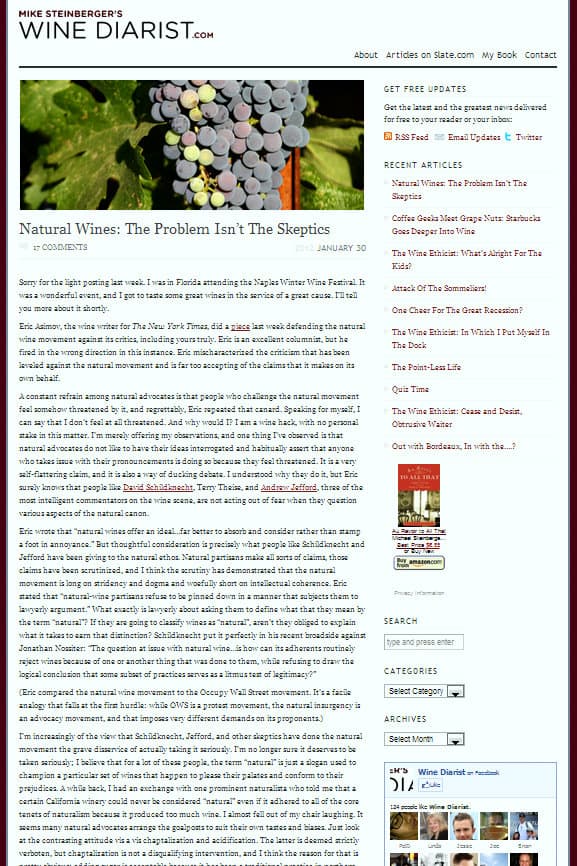 The primary reason for this post was to point out a great new blog I stumbled upon. It’s called the Wine Diarist. I hesitate to call it a blog in the traditional sense. Having written for Slate, Mike Steinberger (who has at least one good Christopher Hitchens story) is essentially a pro. I prefer not to draw distinct lines, though, when it comes to wine writing; blog/pro/amateur – doesn’t matter. If you seek quality, you seek quality. And whether I find it in Wine Spectator, at my local wine shop, or on a wine blog in Australia is less important to me than the substance. Mike (I have no idea if he prefers Mike or Stein the Wine Man) scores high when it comes to intelligent content. If you want to dig a little deeper than just a tasting note, or venture beyond the inward writing (“navel gazing”) popular within some wine blog circles, then you absolutely must add Wine Diarist to your RSS, Pulse, Google Currents, or – better still – Flipboard app.

His latest post is about the oft-discussed topic of natural wine (Natural Wines: The Problem Isn’t The Skeptics). On one side we have the esteemed Eric Asimov of the New York Times who writes (quote from Mike’s article), “natural wines offer an ideal…far better to absorb and consider rather than stamp a foot in annoyance.” Questioning (and debunking?) the assertion, Mike comes out swinging. “Natural partisans make all sorts of claims, those claims have been scrutinized, and I think the scrutiny has demonstrated that the natural movement is long on stridency and dogma and woefully short on intellectual coherence.” Okay, game on! And +1 for the Dawkins-like use of strident.

In Search of non-Canadian self

This is where great wine blogs (and blogs in general) separate themselves from the pack: strong opinion. It’s where I stumble. I blame Canada. I tend to write both sides of an argument. This is how I’d write about natural wine:

Natural wines, somewhat like organic foods and the farm-to-table movement, are a natural progression of winemaking, and in some ways a return to our roots. Golly, that’s good. On the other hand, I can see how many can question its validity. There are no guidelines. It’s arbitrary. Heck, Monsieur Rhone calls it a con. When the French speak we should listen. — All the best, Clint

BONUS: From the Wine Blog Vault

This is like pulling out at a wine blog yearbook… familiar faces, good times. Offline media error messages: priceless. Oh man, the early days of Stark Insider TV. I’m  just happy I learned a thing or two on Premiere Pro and picked up a DSLR.