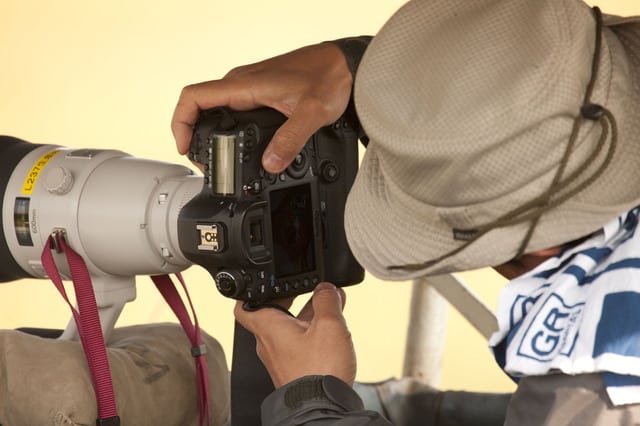 Is this the Canon EOS 5D Mark III?

The Verge posted a brief story about spotting Canon’s nextgen pro DSLR in the wild – literally. Photographer Stephen Oachs spotted a Canon employee using the unidentified camera being used on a safari in Kenya and he snapped this shot – TMZ style. Some tape suspiciously conceals the model and logo. Curious minds go into overdrive! Let the rampant speculation begin!

Being a DSLR nut, I’m looking for every morsel of information (rumor or otherwise) on the 5D III. I’m thinking I’m not alone in that regard. The Mk II has been a smash for Canon, and is a wildly popular choice for pros of all shapes and sizes, especially those interested in video – it’s been famously used for many films including 127 Hours as director Danny Boyle told Stark Insider in this interview. TV shows such as House have been shot entirely with a 5D.

So what tidbits are revealed?

Here’s what we sort of know per The Verge – and remember, of course, this might be just some old mule out for field testing:

From what I’ve read we should be seeing the new EOS 5D in a matter of months. The big question is price. Nikon recently released their new flagship, the D4. Priced at $6K it competes with the Canon 1D. For the Mk III I’m guessing around $2,700. Pure speculation.

Currently I’m still armed with a Canon EOS 60D and trusty Rebel T2i. I take the T2i with me when (a) the environment is rugged and I don’t want to chance getting the 60D sensor contaminated (such as when I travel to Baja California Sur – latest shots here); or (b) to use a second camera in some of our SI interview shoots. Otherwise I’m loving the 60D as my primary rig. Recently I took it up to Detroit for the auto show, and it didn’t disappoint. I’d consider a 5D Mk III for the next step in performance, in particular its low light performance.