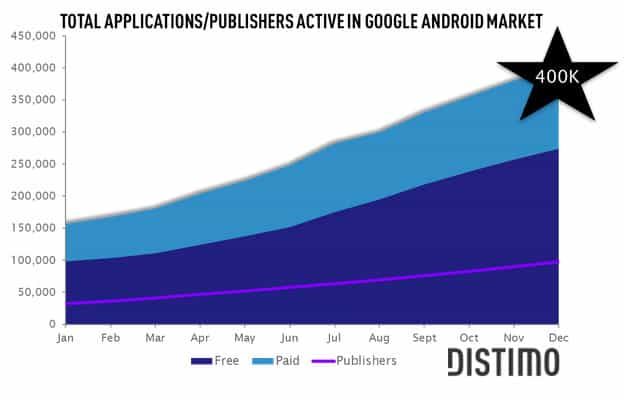 In the app war of Apple vs. Google it’s a case of Quantity and Quality vs. Quantity.

Research firm Distimo reported today that the number of “active applications” on the Android Market now exceeds 400,000. 68% of those are free apps; their reasoning for this is the success of the freemium model.

Android Market is also growing faster compared to historical milestones reached by the Apple App store; for instance, to grow from 300,000 to 400,000 apps took Android only 4 months compared to 7 for Apple.

Also positive news for Google is that there are over 100,000 active publishers developing apps for the platform.

That’s all well and good, but my big question is:

Do consumers value quality or quantity?

From what I can tell Apple has both, while Android tends to only have the latter. Worse still, some of the Android apps, due to Google’s open approach to approval, have been found to be thinly veiled malware (though Google has been taking action and kicked them to the curb).

Developers often note that making apps for iOS means more revenue potential – in fact, Apple out-grosses the Android Market by about 400%.  iPhone and iPad users are prepared, and willing to pay for content and apps. One publishing house told me, “Android is driven by a community of hacktivists, rooters, and freeloaders – you don’t build a nice house in that neighborhood.” While that may not be entirely fair or accurate, the differences in philosophy are evidenced by how the app stores are run. Apple is notoriously closed with an arduous approval process. Google is the hippie- easy going, rough around the edges, looking for a good time.

Here’s what Investopedia said in an article on App Economics:

Even though Google has a huge market share in the apps field, its Android market doesn’t make publishers nearly as much money as Apple does. The app developers still choose iOS first for launching any app because they see more profit potential. According to Pipar Jaffray, a U.S. investment banking firm, Android developers earn just 7% of what iOS Apple Store earns for its developers.

Regardless, you can’t argue with success. Google’s Android OS, on the market for merely three years is now the leading operating system with 53% share (NPD via BGR, as of December 2011).