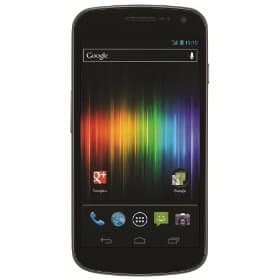 Samsung Galaxy Nexus has landed today, but even better you can score it on Amazon for only $199. That’s about a 33% discount from the $299 you’d pay at Verizon or $289 at Costco. As usual that includes a two-year contract, and pricing may be higher ($249) for those upgrading – ymmv.

The long-awaited flagship Android finally arrived after much speculation about its launch date. Nexus is the first device to ship with Ice Cream Sandwich (ICS), aka Android 4.0, which significantly improves upon the user experience, inching its way closer in terms of usability to the class leading iPhone.

Early reviews have been overall positive with many calling the Galaxy Nexus the best Android smartphone  of 2011.

Others, many out of frustration waiting for the Nexus to finally launch (Verizon did not officially announce a launch date, but instead issued a press release one day prior), went ahead and bought the well received Motorola Droid RAZR, or the audio enhanced (Beats/Dr Dre) HTC Rezound. Some Stark Insider readers indicated they abandoned Android altogether in the wake of  the confusing launch and went for an iPhone 4S instead. Shock and awe. Shock and awe.

Regardless if they do, you can save yourself some hassle, and buy Nexus online and save some money at the same time. Be sure to shop around, and if you decide on Nexus, click the link below to score a deal. Merry Christmas indeed!