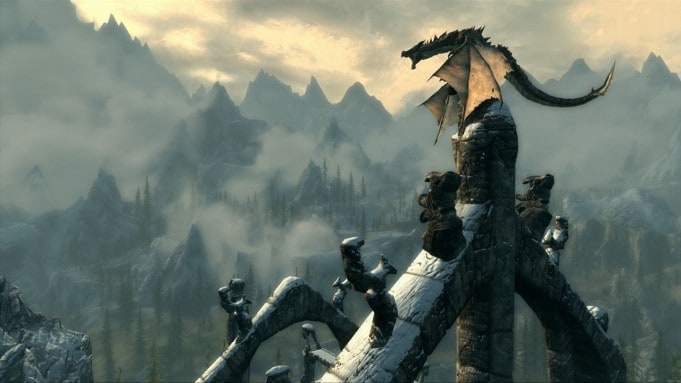 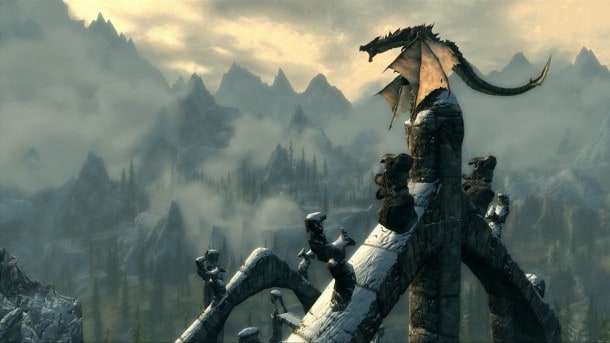 It’s 200 hundred years later (5 in human years) and skies are once again ablaze, dragons terrorize tiny villages, and the High King has been assassinated. Yes, Skyrim has finally landed.

Arguably the greatest time sink of them all–perhaps even besting the short sessions of Angry Birds–I finally had a chance to spend some brief time with the PS3 version of the fifth installment in the Elder Scrolls series. I don’t game often, but the Elder Scrolls, Bioshock and Call of Duty franchises are dear exceptions. They are amazing works; transforming not just video games, but the entertainment industry. So I auto-buy new releases, just as I do with U2 albums. It comes out, I buy it el pronto.

As I watched the opening cuts (average), and spec’d my character (a dizzying array of personalization) I soon found myself in Helgen following an imperial soldier in and around dungeons and burning debris in a dramatic attempt to escaping a dragon. As the events played out, I found myself in an auto-pilot mode of sorts: turn left, follow guard down the path, turn right, open that chest, walk some more, kill that little bugger there with one easy slash, run some more…

With over 5 years of development under its belt, I was expecting a lot from Skyrim.

But it all feels so familiar.

I began to wonder, with slight concern: had Skyrim merely evolved the RPG genre, or had it once again wholly transformed it?

According to Metracritic, gamers and critics alike have spoken. With a score of 93, Skyrim now sits as the #2 rated PS3 game in the last 90 days, and–suitably–tied with Oblivion for #5 all time. Heady stuff.

The graphics, still quite beautiful, are familiar and being the second iteration of the title on XBOX360 and PS3 don’t bring on the wow factor like they once did.

Control-wise, count me as less than impressed… so far. I’m sure I’ll get the hang of this new full-screen, multi-directional menu system, but I liked Oblivion’s just fine. One oddity is the need to double press a button to get to a sub menu. Why the extra step?

No doubt, I have not spent enough time in Skyrim to weigh in with an official rule quite yet. These amount to some (admittedly knee jerk) first impressions. Still, I can’t help but wanting more.

Not every chapter will push the envelope as dramatically as the previous two entries. Morrowind (2002) stunned. As the first ever open-ended game of its kind, we were all floored by the possibilities. Combat was bold, in your face. Magic was sophisticated, and beautiful to behold. And the help system–those little pointers and hints we see all too readily now–were thankfully (and often frustratingly) absent. Morrowind was better for it. The epic soundtrack was icing on the cake. True, the long load times and frequent crashes were a PITA, but we didn’t mind because what the visuals were unlike anything we had seen before. It was the Avatar of RPG gaming.

Oblivion (2007) had similar impact; largely because the game coincided with the launch of next-gen consoles from Sony (PS3) and Microsoft (XBOX360). What was old again–hack and slack dungeon tours, leveling up, talking to townspeople and searching for exotic flowers–was all of a sudden glorious eye candy, aided by more advanced controls, and storylines worthy of a Hollywood blockbuster.

So where does that leave Skyrim (2011)…  Does it capably evolve the genre and series, or does it merely evolve what we’ve already seen, thanks to an updated skin and some new quests?