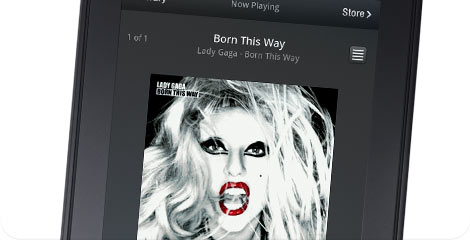 Many are suggesting that Amazon’s new Kindle Fire is the first viable threat to the iPad. Its $199 price also marks a sea change in the market, leaving higher priced Android tablets such as the Morotola Xoom and Samsung Galaxy Tab in no man’s land. This holiday season consumers will likely cross shop the Fire and iPad. Yes, iPad is about 2.5 times the price, but we know one of Apple’s strengths is commanding a premium for a premium design. If iPad is about apps, then the Kindle Fire is about content. So which will be the holiday hit?

The biggest difference aside from the price is the display size. Fire comes in a smaller 7-inch form factor compared to the iPad’s 10-inch. A 30% difference doesn’t sound like a huge disparity, but in practice it’s significant. Fire can easily be held and used with one hand. Try that with the iPad; it’s not exactly bicep friendly. The larger display is better for surfing, reading magazines, and watching movies. Fire exceeds with its portability (though I wish it were slimmer) and ability to feel more like a book.

Hands down, Apple is the King of Apps. Based on Android, the Fire brings name brand apps to the party too- but far fewer. Both have Neflix and Hulu for streaming movies and television shows, Pandora for music, Angry Birds for proving you’re a member of the zeitgeist.

Apple provides a paltry 5GB free with its new iCloud service. With Amazon you get unlimited storage for Amazon content such as movies, books, and music, plus a free month of Amazon Prime. Both will sync across several devices. However, iPad holds a key advantage in its ability to sync other types of content such as contacts, and photos.

Fire has none. iPad has two. The choice is clear for those that want to take photos with a tablet on the go.

Here we have two heavyweights; for the first time Apple iTunes has met its match. Amazon has an impressive stockpile of books (over 1 million for Kindle), music (17 million songs), and movies and TV shows (100,000).

Mobile gaming is huge. iOS has led that charge, primarily via the iPhone. With its large display, and decent processor, the iPad has also helped transform the gaming industry. With flat y/y sales, the next wave of growth likely will continue to come from tablets and smartphones, not desktop PCs and consoles.

Despite early mixed reviews, I’m betting the Kindle Fire is a holiday hit. Not only does it actually fit in a stocking, the price is just too enticing for many families to ignore. Instead of buying one iPad for the household, all of a sudden you can easily buy two Kindles and have budget left over for some content and accessories.

Come 2012, Apple will make its next move. Will we see lower priced iPad 3s? Possibly. Then again, as long as we Apple lemmings continue to line up around the block, why discount a good thing?