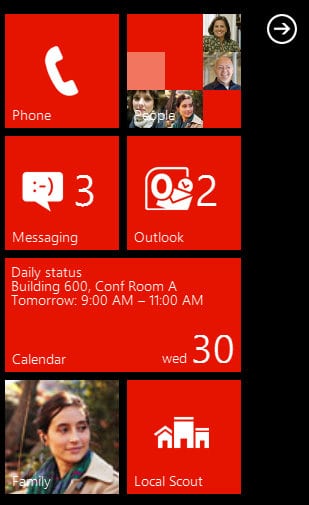 Here’s a simple way to give Windows Phone 7 a quick test drive on your iPhone or Android device. Load your mobile browser, and go to this site: https://aka.ms/wpdemo (note: you can also do this via your desktop browser). An impressively responsive WP7 emulator (HTML5) will pop up. You can actually click through the interface and get a decent feel for the underachieving mobile OS, without having to drive to your local store (where you might have trouble finding a WP7 phone).

After giving the demo a quick spin, here are some of my thoughts:

— WP7 is nice looking–in a Zune-ish way–but lacks the power of Android, and apps of iOS.

— Microsoft is so far behind, I doubt they will ever be a #1 or #2 player in the mobile space, and that includes tablets.

— Zune design aesthetic is a winner.

— Microsoft could do well to double-down on enterprise with WP8/Windows 8 and attack RIM hard. Windows Server and all of Redmond’s enterprise platform products are generally well regarded, if not at least widely installed. The company should continue to fortify as much as it can- After winning the consumer market, Apple and Android are knocking big time on the Fortune 500.

— The beauty of open platforms like Android is that you can install numerous home replacement skins and nearly mimic the functionality of WP7 (or other mobile OSes).

— Total # of people I know who own a Windows powered smartphone: 0.

Would I give MSFT a chance for my business if they had a thoroughly fresh Windows 8 smartphone offering in 2012? Definitely. As much as I cheer-lead Android, I still like to make pragmatic purchasing decisions. It would take a lot to knock Android from the top though. It seems to me if you use Google apps and tools as I much as I do then Android is simply the best offering out there. Things like Google Nav, Google Voice, and Google Music are irreplaceable- so far, I haven’t seen anything comparable on other platforms.

Microsoft’s biggest challenge will be winning over the developer community. We all live and breathe apps. If developers don’t follow, the apps don’t get made. There’s a chicken and egg situation at play. To gain share, a platform needs apps. But to get third party vendors to build apps requires ROI, which in turn is based on install base and potential sell through. For now, this is a two horse race between Google Android and Apple iOS. Microsoft would do well to play the role of early 90s Apple and find a niche it can gain a foothold in, and grow from there.