I’m getting a kick out of reading about how new iPhone 4S owners are inventing ways to build even closer relationships with smartphones. Forget about that cloying, super-happy paperclip “Binky” from Microsoft Office from about a decade ago. This time the buzz is all about Siri – Apple’s new voice recognition technology (based on a company of the same name it acquired in 2010).

Being a steadfast Android fan and original Moto Droid owner, I’m watching the whole thing with amusing skepticism. We’ve been talking to ourselves … I mean, our phones, for years. Sure we get blank stares from Droid when we ask such important things like “Do you love me?” or “What is the meaning life?” But try this on Android: “Navigate to the nearest gas station.” Et voila! Sometimes relationships are all about function.

With Siri, it seems Apple, though, has done it again – taken a mainstream technology (voice recognition) and made it exciting. In addition to Angry Birds, we also have Cupertino to thank for kicking productivity in the tender area yet again: is this stuff saving our time or using our time?

Every upgrade cycle brings such a feature. It’s clearly a differentiation strategy that is working. I’ts like clockwork. Each announcement brings a must-have feature. And, in true Apple style, it’s not about bits and bytes, nor is it about speed to spare. It’s about something that not only works, but makes you – the user – feel special. That’s Siri for you.

Siri can partially thank Eliza, her artificial intelligence forebear. Sure Eliza sounded more like Hal than, say, that sexy Brit you have on your old customized Garmin. Of course, there was also no voice recognition. We had to rely on the keyboard to get our dose of therapy and answers to life’s big questions.

What’s the meaning of life?

Do you love me?

Siri: My End User Licensing Agreement does not cover marriage. My apologies.

Siri: I thought so.

Why are you so awesome?

And the list goes on…! I’m sure there’s an infinite number of Easter eggs with Siri. It will be interesting to see what happens when the honeymoon phase is over. What will Siri do if she ever heard you were considering upgrading to a Google Nexus Prime? 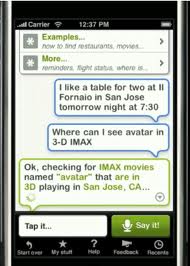