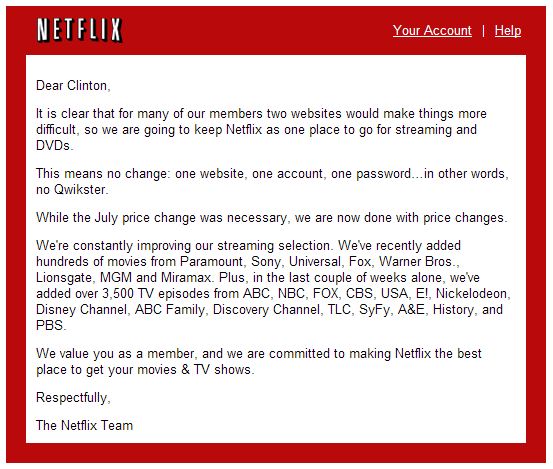 So boring… capitulation. Apple would never do this.

Interesting how this email is so curt and signed “The Neflix Team”. So much for the personal Hastings touch.

The split actually never bothered me. I only use the streaming service. Apparently I’m in the minority on that, and this fiasco called Qwikster will go down as one of the biggest tech screw-ups of 2011 – I can just hear some clatter in the background…listen! Hear that?! That’s the HBR case study being written up for MBAs on how not to handle customer communications.

Does this spell the end for CEO Reed Hastings?

It’s hard to imagine he could survive a massive blunder like this strategic misstep. Few companies have ever been able to “abuse” their customers so publicly and escape without impact to loyalty… not to mention subscriber count.

On WSJ, there were quite a few good quotes in their apprisal , including this one:

“Over the past several years, [Netflix’s] management has executed incredibly well and operated so far above the curve that people have been in awe,” Lazard Capital analyst Barton Crockett said. “Then they do something like Qwikster and people realize they’re human too… The rapid-fire waffling about the name change probably dinged their momentum near term, as did the decision to raise rates 60%.”

In Netflix’s favor is their huge lead – there simply aren’t many alternatives. Blockbuster – seen that, done that. Hulu – close, but different content, focused more on television. Amazon – the likely best bet in the space. Bezos is on fire (couldn’t resist). Meanwhile, Hastings could very well be fired.