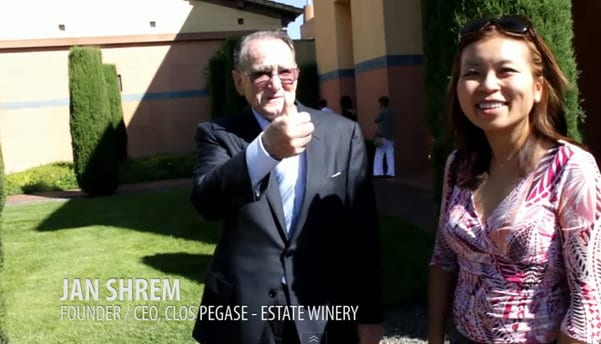 Some great news this morning for the arts in San Francisco; the kind of story that will put a smile on your face, and possibly even lead you to belt out your own mini-Ring cycle (that could take a while). San Francisco Opera announced that Jan Shrem, the iconic owner of the Clos Pegase Winery in Napa and Maria Manetti Farrow, have donated (“committed”) $3 million to the company. General Director David Gockley announced the news on Friday evening, September 9, from the stage of the War Memorial Opera House.

I met Jan Shrem earlier this year when we headed to Clos Pegase to shoot an interview — a few hours in wine country I won’t soon forget (Searching for Bacchus). I wasn’t sure if he’d accept our request, but our motto around here is always to try, try again. In 2010 Jan’s long-time wife, Mitsuko, succumbed to cancer. From what I understand they were also inseparable business partners. So I wondered what life was like for an 80-year-old (about the same age as the timeless super-diva Rita Moreno who we saw dazzle in a one-woman show last night at Berkeley Rep) publishing magnate running a demanding wine business. I was thrilled when we got the green light to spend some time with him. 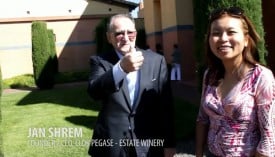 With equal doses of passion.

Also memorable was his love for the arts. In fact, on that day at Clos Pegase, a crowd was gathering for another of the winery’s classical concert series, held deep within the underground wine caves. He whisked us around the grounds, pointing and describing various pieces of arts. I chased Loni and him with a camera trying abysmally to keep up.

At one point I was standing in an antechamber adjacent to the tasting room underneath a massive iron ball suspended from the ceiling by a frail, and extremely frayed cord. Jan Shrem pointed and told me to quickly move, “We don’t know when it may fall!” I could picture the massive ball crashing to the ground, sending all the surrounding art pieces and wine bottles sinking into the Calistoga earth in a sea of Cabernet. Odd, I wondered. Why doesn’t he take it down, and… what about that legal liability? Then I realized this was the remarkable guy that had the famous “thumb” installed into the vineyard grounds. Ah, yes, storytelling and art.

Earlier in his office, he spoke about Mitsuko. He picked up a framed photo sitting next to the computer, and talked about how they met. The goosebumps were aplenty – and I was forever thankful that we were able to spend time with him on that sunny day in Calistoga.

I don’t really know Jan Shrem of course. Those that do I’m sure will have their own remarkable encounters. But I do know he loves the arts, especially the Italian Opera, and his and Maria Manetti Farrow’s generous gift means all of our lives will be enriched. The financials of San Francisco Opera are no secret. And they’re not pretty – like most non-profits trying to keep afloat in this recession (after recession). According to the press release “Mr. Shrem and Ms. Farrow will fund all of Maestro Luisotti’s San Francisco Opera appearances in the 2012-13 season.”