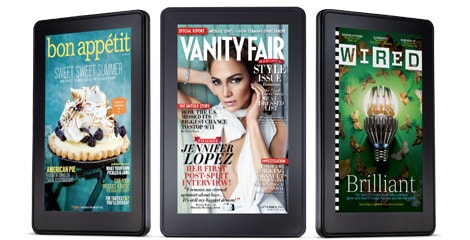 The price war cometh. With CEO Jeff Bezos’ announcement today that the new Amazon Kindle Fire tablet will come in at only $199, all of a sudden that “entry” Apple iPad priced 250% more at $499 doesn’t look so enticing. If anyone can put a dent in Apple and its market leading iPad, it would be Bezos and Amazon.

If it works, the Fire will be the first device to truly take Google Android to the masses, something that so far has alluded the likes of Samsung, and Motorola. There’s carnage aplenty in the iPad’s wake including RIM (BlackBerry PlayBook) and HP (WebOS).

The difference here is that: (1) Amazon has oodles of content, and knows how to make it easy for consumers to buy and download to their micro-transaction-heart’s content, and (2) Amazon knows its customer – they don’t want speeds and feeds, man, they want reads and reads.

Amazon actually announced 4 products this morning including an update to its standard Kindle reader ($79), new touch versions, the Kindle Touch ($99, $149 with 3G). But its the “full color” Fire, which will be released November 15, that is likely to grab the headlines today.

So this Amazon Kindle Fire, how about it?

It does skimp on a few things though. There is no camera or microphone. But — see point above — Amazon is focusing on purpose here, and knows what its customers want to do. If you want an all-in-one uber tablet you’re likely to go with iPad. But for the masses that love to read, want portability and don’t want to break the bank, your tablet has arrived.

There’s a lot of debate out there whether or not the 7-inch format is viable. After all, a 10-inch display, like the one on the iPad, is what people really want – the sales record speaks for itself they suggest. Partially true I say. This is going to be a huge market – Forrester predicts 50%+ growth through 2015. To put it in hockey parlance, we’re still in the first period… and we have yet to even see the first fight. Like the laptop market, I expect the tablet market to rapidly expand into multiple product lines, offerings, and price points. We have 10, 11, 12, 13, 14, 15, and 17-inch laptops. Why should tablets not also be as diverse?

No doubt, I prefer reading magazines on the iPad’s 10-inch display. It’s also preferred for web browsing and videos.

But, my little 7-inch Samsung Galaxy Tab has been a real mobile workhorse. It’s easier to take with me, and quite capable doing all the things I need to do on the go: Gmail, calendaring, Twitter, Facebook, etc. Not to mention you can run all of the Android apps on it too, so there is a lot of power here.

Most importantly, for reading, the Fire at 7-inches should feel just right in the hand, especially for those that are coming from the Kindle. Its IPS-based display could be a particularly important differentiator in a space where many Android tablets look generic.

This holiday season is going to be very interesting indeed… I’ve talked about the sub $99 tablet market before and we’re well on our way to the mass market consumerization of the segment. I’m sure many will say the Kindle Fire will sell like… well, fire. But I have a different analogy. And it’s called the Cabbage Patch Kids.