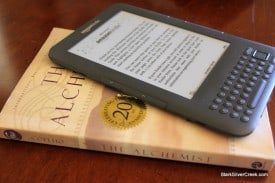 It works for movies, but will it works for books? Like Netflix and its monthly rental service that offers tens of thousands of streaming movies to consumers, Amazon is reportedly set to launch a similar service, but for books.

Don’t judge a book based on its … pricing model.

According to the WSJ, you’d pay an annual fee and have access to a library of content. The article suggests Amazon would lump this offering in as part of its “Prime” service ($79) which also features free two-day shipping, among other benefits. Given the success of Kindle there could be massive potential.

Note that this bit of morning news comes from “people familiar with the matter” and that neither Amazon nor any of its publishers have confirmed any talks or plans.

I say yes if the content made available under the service is current and compelling (two, big ifs per WSJ).

Here’s 3 reasons why the idea might have legs with consumers:

1. Consumers “get” the idea of subscriptions – it work for movies, TV, and music. Why not books?

2. The rise of tablets and e-readers has created an altered valuation on the traditional book form.

3. Unfettered consumption seems to have appeal. Have you seen how crowded the all-you-can-eat buffets are in Las Vegas?

The trick here will be getting publishers on board. It will be a challenge that will require Steve Jobs-like gusto. If CEO Jeff Bezos can pull it off, even if in a limited initial form, it could give Amazon a unique differentiator when it brings its iPad competitor to market this fall.

One big reason why the idea might not fly: e-books are on fire. According to the Association for American Publishers, 2010 e-book sales grew 164% (the overall market for book sales was $11.67 billion).

Some suggest this service already exists, and it’s called: the library.