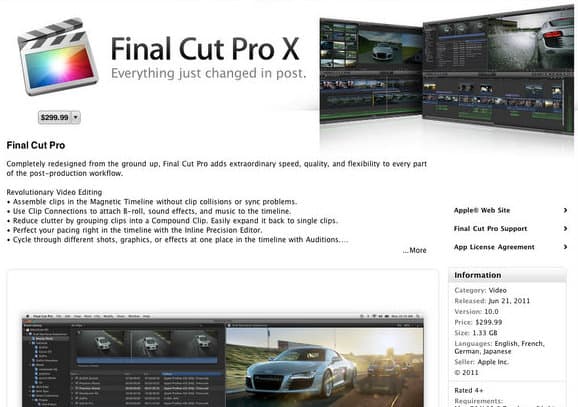 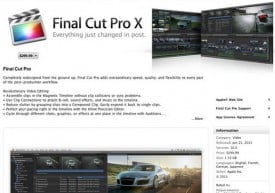 With Final Cut Pro X, Apple must be a really nasty hang-over. Either that or licking its wounds. Both are new territory for a company that is the witting eternal star of tech and pop culture. Negative reviews?! … for Apple?! Say it ain’t so!

Consider me surprised by the harsh response to the new editing software released this week. After all the hoopla earlier this year and Vegas and the live demos that brought oohs-and-aahs I had high expectations for the $299 “App.” So much so in fact that for the first time I began to contemplate a switch from Adobe Premiere Pro (with the requisite change to Mac hardware as well). But now I’m kind of glad I waited for the dust to settle before making any knee jerk reactions about our edit bay.

Did Apple screw up with Final Cut Pro X?

I guess the easy answer would be a Sheen-like: duh! yeah! hello?! Scanning headlines last night and again this morning reveals a percolating backlash of discontent. Who moved my cheese, bro? The biggest offense seems to be the new dumbed down UI which is being dubbed “iMovie Pro” which is to say it’s very consumerish. In the eyes of the pros — remember, FCP has been used by Hollywood for years — this is like giving James Cameron a viewmaster to work on Avatar 2 and 3.

If the reports are true, Apple is now acting decidedly un-American, and blocking information by squashing the uprising.

The negative torrent of negative reviews on the App store has apparently become too much for a company used to 4.5 star glory (Aperture). It’s response? Block the reviews! Next: a burning caldron of oil. How’s that for non-linear loyalty?

Despite that minor drama, the app still only has 2.5 stars (out of 5) on the app store with 727 ratings as I write this.

Heads will roll in Cupertino, no doubt.

One thing I find peculiar is the decision to release only one version of the software. The one-size fits all might’ve seemed clever at the time, but by placating prosumers, pros and even advanced hobbyists all with the same package, Apple has backed itself into a corner. Who then should primarily drive the product direction, and who will product managers prioritize for their roadmaps and product plans? There are just a few Academy Awards worth of difference between Francis Ford Coppola and the guy who cut a video of his cat piano-syncing to Barry Manilow.

Then there’s me. To switch or not to switch?

I thought for sure today I’d be heading for an Apple store to pick-up a 27″ iMac i7 and hurrying back to download FCPX. Magnetic timeline!

But now Adobe CS 5.5 including After Effects and Premiere Pro is looking mighty sweet about this time. Oddly, despite the modern aesthetic of Final Cut’s new interface, I still very much appreciate timelines and the classic editing look of Premiere. I don’t think we need to design this for babysitters, folks.

The adventure continues. Next up, I’ll share the specs of an i7 rig I’m looking at buying for the Stark Insider edit bay. Looks like it’ll be Microsoft (Win 7) and Adobe (CS 5.5) ftw!