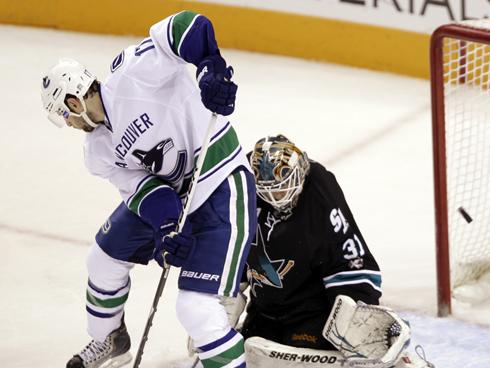 For the second straight year the San Jose Sharks will play in a best-of-seven conference final with the winner moving on to the Stanley Cup final, a destiny this team has yet to enjoy.

But first they’ll need to get past the league’s number one team in Vancouver.

The Canucks won the President’s Trophy with an impressive 117 points. This is the first time the two teams have met in the playoffs. Vancouver held the edge with three wins in four match-ups during the regular season.

Listen in as Vancouver filmmaker Aaron Houston joins me on this Stark Insider podcast to discuss the series, plus make a few predictions.

It hasn’t exactly been clear sailing for either team in these 2011 playoffs. Vancouver had to quell a comeback in the first round by the Chicago Blackhawks, the defending champs, to pull off a seventh game win. Goaltender Luongo was maligned and criticized (fairly I think, especially given his star status and contract to match) for not playing up to expectation. The Nashville Predators didn’t go down without a fight, either. Meanwhile the Sharks are coming off a brutally intense seven game series. Trailing 3-0 and facing a sweep, the Detroit Red Wings clawed their way back as the Sharks failed to close them out in three successive games. Emotions boiled over after game 5 when broadcaster (and former Shark) Jeremy Roenick called Patrick Marleau’s performance “gutless.”

So what to expect then in this conference final?

For one, I don’t think it’ll be a stretch to suggest this will be another closely fought series. Neither team seems to be able to win (or lose) a game by more than one goal.

Goaltending: Niemi has looked brilliant throughout (aside from a slow start in the Kings series) while Luongo perhaps has a confidence issue.

Defense: this could be the area where Vancouver has the biggest advantage. Former Shark Erhoff is producing and is playing a solid, inspired game- trailing only Boyle in playoff points. Bieksa and Hamhuis are not the biggest blue-liners around, but the top D pair are getting it done when it counts.

Offense: it’s a toss-up here. The Sedin twins are a powerhouse, but so far haven’t generated much offense in the playoffs. Thankfully for Canucks fans, Ryan Kesler has stepped up big time. The Sharks are stacked with talent: Thornton, Marleau, Heatley, Boyle. The third line, with Pavelski is always a threat too.

It never gets easier. The series opens tonight (5:00pm Pacific) at Rogers Arena in Vancouver. Game on!