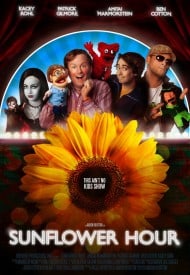 What does it take to make it in childrens television? Aaron Houston’s first feature film, Sunflower Hour, explores the “seedy underbelly” of puppeteering and follows in the footsteps of many of the great mockumentaries (that we discuss in this podcast) including Best in Show, and of course Spinal Tap.

In this special film-making/NHL hockey-talk Stark Insider episode, Aaron calls in from Vancouver where he is finishing post-production on the film. We cover the gamut from his first short, Two Theories, One Stone and “douchebag” marketing to the gear he uses to shoot the film and the creative processes involved in completing the project.

He also talks about his experience at the Cinequest Film Festival and some of the ins-and-outs of the independent film festival scene- which these days can even include films starring George Clooney (and other big names like James Franco and Edward Norton, as we discovered at the Mill Valley Film Festival last year).

About Aaron (from Unpaved Productions site)

Aaron was born in Montreal and raised in Vancouver so although his interests include yoga and mountain biking, he can also appreciate a good smoked meat sandwich now and then.

Trying to be responsible in life, Aaron opened a restaurant in Sun Peaks but soon realized that he didn’t like food and snowboarding as much as he liked movies and rejection so he moved back to Vancouver to become an actor, which was cool for a while but he discovered that his passion was really behind the camera, writing and directing. He made a bunch of short films, started co-producing the Celluloid Social Club and produced the feature film Taming Tammy where he met Aisla and the two decided to form their own company. Oh, and somewhere in the middle of all this Aaron had a daughter named Zoe, who is now seven, of whom he is a dedicated full time single dad.

Meanwhile, both our teams, the Vancouver Canucks and the San Jose Sharks, are in the 2011 playoffs… so, to be continued…