Someone else is #winning. Google’s little green robot, Android OS, is out front with 29% market share in the battle for smartphone supremacy. RIM and Apple iOS are neck and neck for second place with 27% share each. That according to a report today from research firm Nielsen based on December 2010 results.

However, as noted in a blog post summarizing the results, it depends on how you slice and dice the data. For example, if you measure the number of devices shipped to consumers then RIM and Apple lead. This is because “they are the only ones creating and selling smartphones with their respective operating systems.”

HTC is the leading manufacture of Android devices at 12% of all shipments, followed by Motorola (10%), and Samsung (5%).

Although fairly evenly split, one finding jumps out when examining the chart (see below) based on demographics. It appears there is a slight preference among young people (18-24) for Android, and also a slight preference for RIM among older people (45-54).

This seems consistent with years past as BlackBerry has been traditionally viewed as a corporate weapon of choice (although that may be changing). And because Google’s strategy is based on an open system with no licensing fees, manufacturers and carriers have been able to aggressively price Android handsets which likely in turn appeals to younger, budget-sensitive buyers.

No matter how you slice it, Google has done a remarkable job with Android. In only three years they have entered the smartphone market, established a new brand and quickly positioned themselves as a major force alongside Apple and RIM.

One area where Google has work to do: app revenue. While Apple raked in over $4 billion from iTunes (movies, music, apps, etc.) in 2010, the Android market has paled in comparison at just over $100 million. 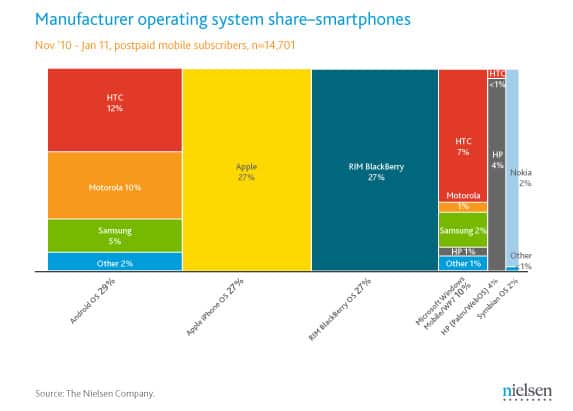 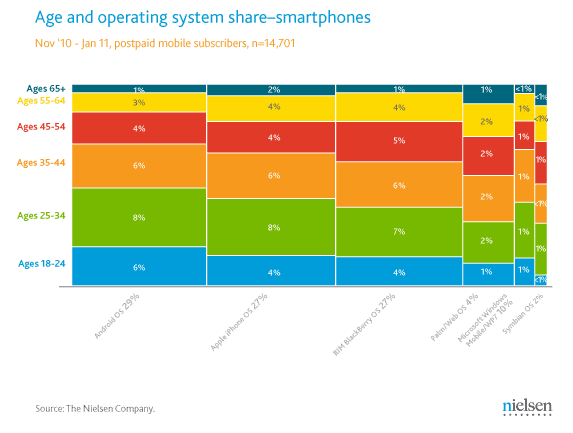