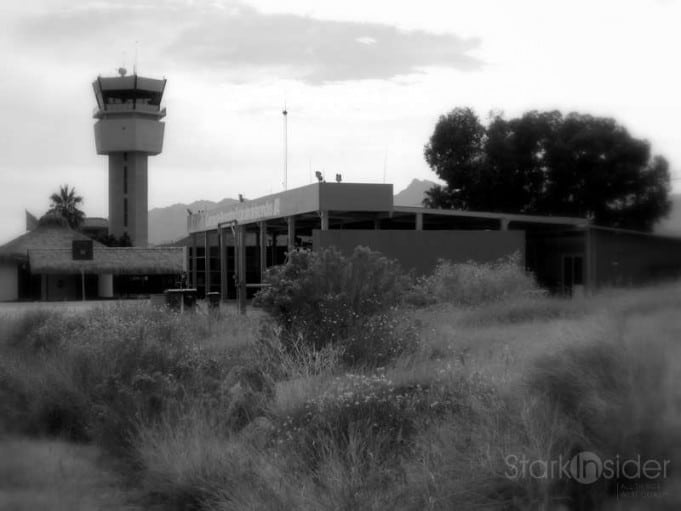 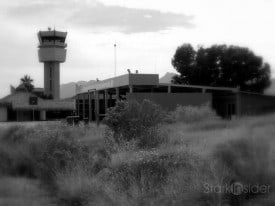 The only traffic light here at Loreto airport has just two colors: green and red. In retrospect it makes perfect sense. Those looking for middle of the road, or the lesser of the extremes, would probably not be landing in the Baja anyways. So you either go or stop. Fiesta or siesta. And why not get a first-hand lesson in this historic culture at the security station underneath a palapa hut on a sweltering day on your way to the little fishing village of Loreto?

We had endlessly researched our dream in the desert next to the Sea of Cortez. After all the sales presentations, the never-ending array of uber-glossy marketing materials and future narratives courtesy of our energetic sales associate Manny Cordova (“Picture yourself sauntering down the European-inspired walkways… waving to your oh-so-happy-and-relaxed neighbors, then grabbing a fresh baguette and cap at the local cafe, and then sitting in a tower to watch the sun set over the Coronado islands.”) it would be a little casa: a watercolor elevation brought to living, breathing life, one Adobe “Dr. Dirt” brick at a time–so we were told. Later it dawned on me that perhaps Elaine Benes of Seinfeld wrote some of this creative copy. You know, the J. Peterman urban sombrero. Sure, sign me up; I’ve been subdued into submission by your endless visions of alternate reality and finally must relent knowing that regardless of what becomes of me in this lifetime I still make weekly trips to Costco and Whole Foods.

Eventually it would be known as Casa del Lagarto Azul.

I would picture it as some kind of James Bond-like getaway. Maybe it would have a small pool with sharks at play. I would enjoy a martini, ponder service to god and country, and wait for Pussy Galore. Sadly, in reality it would be something a tad less outlandish… something to do with a blue lizard according to my doe-eyed wife who was championing our Baja real estate adventure.

That traffic light, then. It is not built for drivers. How cliche! No, this traffic light is for you and I, Joe Americano (or Kelly the Canuck as the case may be). After we clear customs, we need to pass this test before we are free to roam the Baja landscape. It is literally your everyday run-of-the-mill traffic light–the only other one in the vicinity is located downtown Loreto at the intersection of Miguel Hidalgo and Indepencia next to El Pescador, the town’s grocery store. But it’s no where near as fun.

Our luggage travels slowly on a conveyor belt to the left and through a screening machine. Then it’s our turn to each push the button. Loni, of course, gets green. Me, fittingly, red. But I have no one to blame but myself, after all I pushed the button and therefore fate was in my hands. I had control. While my luggage is being hand checked on a table to the side, other passengers proceed briskly on their way, giddy that theirs is green. There is no rush, though, only calm. Unlike Silicon Valley, there is no gridlock or ideologies revolving around meritocracy or need to speak with accelerated staccato.

I remember standing there in 2006, my first visit, on our way to possibly buy a home. Looking back almost five years later I realize that we really had no conception of the types of events and, at times, outrageous spectacles that would follow. At that moment I could’ve been just an excited kid. It kind of helped I’m sure that our Alaska pilot, Captain Drama, had minutes earlier performed quite a respectable fly-by of Nopolo, the community just north of town where the Loreto Bay resort was being built. The small plane had banked impressively, dipped low towards the gorgeously blue Sea of Cortez, and finally circled back around the islands before landing smoothly at LTO. Nowadays, the arrival is somewhat less dramatic. It could be SFO now really. Either that or my imagination has become jaded and hardened by years of tumbleweed, cacti and Tecate.

As I stood and watched passengers arrive, I pondered their back-stories and motives for coming to Loreto. There was a boisterous group of guys (yes, dressed in Hawaiian shirts) with fishing tackle and empty coolers, presumably to store Hamachi and other catch for the return home. I think their vacation started mid-air. A seemingly never-ending parade of Buds and tiny airline liquor helped lubricate the boys’ escape from domestic reality.

A well-dressed, middle-aged couple had told us earlier in the immigration line they had purchased a custom lot, a Posada (condo) and a casa right alongside the planned estuary. I recalled thinking: what real estate boom?!

Then there was that young guy, Gebbert, with the funky SF-style shades who worked at a company most hadn’t heard of back then. It was called Facebook. He seemed to be most interested in chicas and all-nighters. He had paid cash for the place, sight unseen.

Also making their way through security at LTO was a former lightweight boxing champion (who enjoyed telling tall tales), a plein air artist, and someone who kept inexplicably shouting “Yoooowwwwzah!! Oh yeaaaah!!!”

Earlier we had run into someone we knew from the Napa Valley. Formerly she had a successful TV food and wine show. That was, until the “oozing cleavage and orgasmic meatballs came marching into town” (i.e. Giada De Laurentiis).

But the most curious person I had met so far was the woman sitting next to me on the flight from LAX. I’ll be the first to admit that her pixie-like attire kind of threw me for a loop. Was she from Berkeley?

As I dozed in and out of sleep I’m quite certain she told me she owned a place on the Pacific side that was powered by a generator. It was a self-sufficient home. While we were talking she took notes in a small, tattered journal. She told me she lands in Loreto and drives a jeep across the spine of the Sierra de la Giganta mountain range to reach her secluded getaway. The place, I would learn, was called Scorpion Bay, a tiny village that was well known to surfers thanks to its mondo wave action. She jotted some more, using the most bizarre pen I’d ever seen. And it seemed to stink too! Was I dreaming? It looked like it was wrapped in hemp or some sort of herbal/grassy crafted concoction. But, man, that odor… from a pen no less. To say the waft of humid Baja air was welcome after we landed would be an understatement of, well, Miguel Hidalgo-like proportions.

Ironically, before we descended into LTO, she offered me one of these pens which she makes by hand and sells on the Internet.

Now I stood waiting. I was paying my red light dues as a friendly security agent inspected my Gringo survival kit. I glanced around the terminal. Rosemary was nowhere in sight.