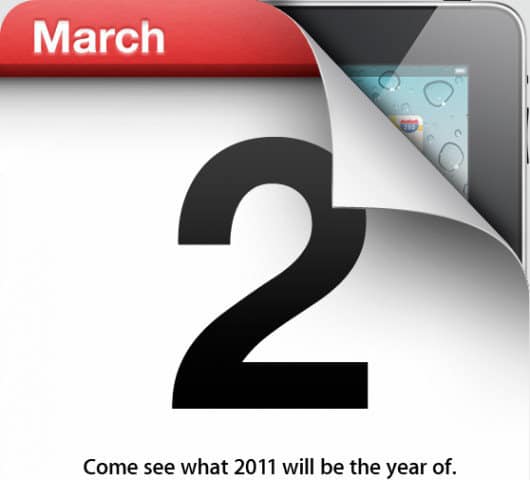 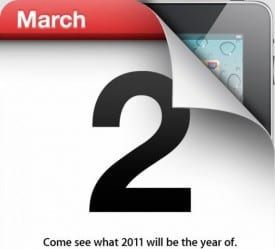 Apple officially announced a media event for next week, on March 2 at the Yerba Buena Center for the Arts in San Francisco. The easy money is that we’ll finally see the iPad 2 unveiled. And all I can say to that is: phew! Close call on that, who knew that there was even a sequel to the tablet coming anyways?

The image included with the invitation pretty much confirms that the event will be about the iPad. Just behind the pealing calendar in the top right you can see our well-loved friend, peeking through, no doubt with a front-facing camera just out of view.

According to Apple Insider, “overseas supply chain sources expect Apple partner Foxconn to build between 4.5 million and 5 million iPad 2 units in the first quarter of 2011. That would be followed by another 3 million to 4 million units in April.”

Apple has sold 15 million iPads since it was first launched in January 2010.

Samsung has had minor success with the Galaxy Tab 7-inch tablet, but nothing close to the volumes seen from Cupertino’s smash hit.

When Honeycomb, the next major release of Google Android, hits the market we may finally (finally!) see some decent competition from other products. The Motorola Xoom figures to be a major player.

By the time the competition finally gets to market with their 1.0 tablets, Apple will already be shipping second generation. A 14-18 month lead time in the tech market is simply unheard of.