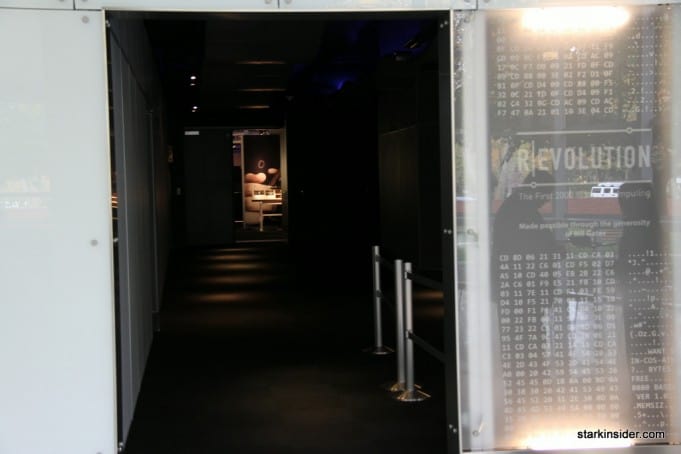 Where better to launch a new exhibit chronicling the first 2000 years of computing then right here in the heart of Silicon Valley?

The Computer History Museum, based in Mountain View, California, this week unveils to the public their $19 million renovation and a new exhibit, “Revolution,” featuring 1,200 items — which, amazingly, represent only 1% of their entire collection.

Of course when we were invited for a sneak peek at the new exhibit, I — admitted uber geek, former Commodore 64 and Apple ][ hack — jumped at the chance.

This Stark Insider TV segment is the result of a tour of the beautiful facility that includes footage of some iconic artifacts (it does feel odd to call computers and tech-related devices, “artifacts”) including IBM’s 026 punch card machine (1949), a Seymour Cray (1925-1996), a stunning and operational Babbage Difference Engine (built in modern day to prove that Charles Babbage’s design was feasible) and a Data General Nova (1969), the computer that Apple Co-founder Steve Wozniak told his Dad he’d one day own, 4K of memory and all.

But the Computer History Museum and “Revolution: The First 2000 Years of Computing” exhibit are about more than just numbers.

“Computing is so much a part of our lives today. It touches everything we do,” president and CEO John Hollar told us during an interview. “When you think about how quickly computing is moving, the history can be lost in an instant. So we work really hard to make sure that those important stories and the things that have been built are preserved and presented to the world.”

As we made our way through 25,000 square feet of exhibition space (the total building is 120,000 square feet) I got goosebumps. Largely because it astounds, the progress we’ve made as a civilization when it comes to technology.

Coming back from the Consumer Electronics Show in Las Vegas last week puts in perspective how rapidly we are moving. SanDisk had showed me a 64GB SSD that was the size of a postage stamp. The IBM RAMAC actuator and disk stack (1956) which has 50 24″ disks spinning at 1,200 RPM by comparison holds a paltry 5 million characters of information (just over 4MB), yet it’s about three to four feet in height! The museum constantly reminds us of Moore’s Law.

And it’s easy to forget that the history of computing doesn’t start with the landmark Apple 1 or 2 computers or even the successful IBM PC — although they were generally credited with bringing the “personal” to computing. Rather recall that the first calculator, the abacus, was invented as far back as 2700-2300BC.

But of course we couldn’t finish our visit to the Computer History Museum without a mystery, an engineering challenge of sorts… one that you get to literally walk all over.

Can you figure it out?

Tells the story of the technology, people, companies and impact of one of humankind’s greatest inventions: the computer.

Exhibits include Charles Babbage’s Difference Engine No. 2 and Mastering the Game: A History of Computer Chess.