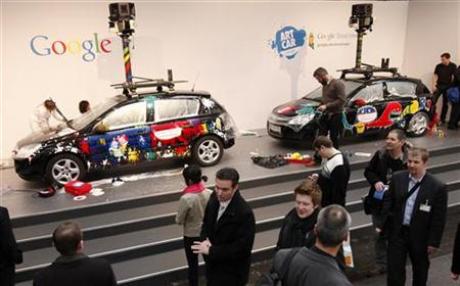 If a stranger took your picture on the street would you care? Or would you even know it happened, if the said photographer was operating in a clandestine fashion? Then, ask yourself, how you feel about a robot doing the same thing… capturing every bitty square inch of real estate across the globe, all so that it can be uploaded to the monstrous Googleplex for use in the cloud.

The results have been quite amusing so far–at least to some. It’s made for a good bit of Web humor, the incidental things caught on camera. Mashable wrote about the “Top 15 Google Street View Sightings“: a tall ladder that might not meet code resting on a home, a fallen women next to her walker, zombies, a police bust, a crime in process.

Germany, Korea, and others, however, are not amused.

Google Street View is causing ripples when it comes to privacy concerns. And, once again, the service (which produces some stunning 3-D views of streets used with Google Maps) is finding itself grabbing some not so flattering headlines. Then again, perhaps all (Google) news is good news?

Bowing to privacy groups and mounting pressure, Google recently allowed a four-week deadline for Germans to remove themselves (and their homes) from the photo-taking robot which would soon cross the country. The move is not exactly placating state officials, however.

“The Stasi would be green with envy if they could have collected this kind of data,” wrote the conservative Frankfurter Allgemeine Zeitung newspaper. “What in the past was called ‘state snooping’ is now called ‘Google View’.”

In the new world of social networks, our lives are increasingly public. Many will suggest that Google Street View is just more step in a future that dictates we forgo some amount of privacy previously enjoyed in the past. Privacy watch dogs, though, see it very differently.