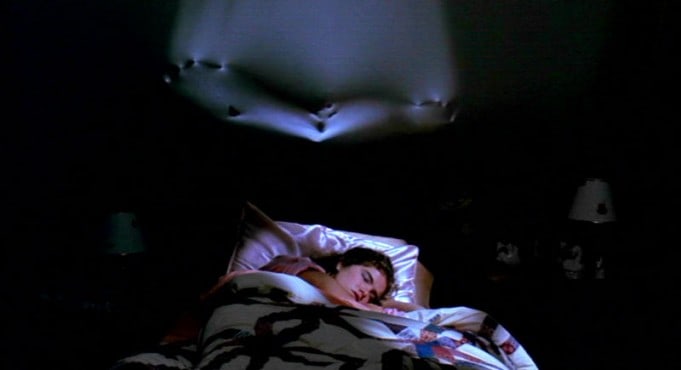 Ah, what a special day. Friday the 13th. The day I get to enjoy a horror-ific journey down memory lane. Horror movies, much to the chagrin of most that know me, are my favorites (here’s my top 10 list). Yes, I like dramas/thrillers (Memento, Mulholland Drive), comedies (Austin Powers, Waterworld), epics (Lawrence of Arabia), Sci-Fi (2001, Planet of the Apes – original only), Foreign films (Saraphine). But the horror movie is at once the least understood art form, but also the most complex, dark, emotional. These films can make you flinch, and scream. In many ways, every guy knows they make the ultimate–hold me!–date movie.

My first taste of horror, though, came in the form of a novel that I probably read at far too young an age. That would be The Shining by Stephen King. I remember switching all the lights on to read it. When my parents were gone, and I was left as a 10-year old alone in the home, I’d read it outside on the porch where I could quickly escape down the street, hollering. From what, I have no idea. The words, though, haunted me and I loved every second. From that moment on, I bought every King novel in succession. Man, were they good reads.

Then in 1979 I called my parents from the lobby of the local Cineplex, “Can I see Amityville Horror?” It was Restricted and I was only twelve. Will you be able to sleep afterwards they wondered. Probably not I thought. Part of the thrill of the horror movie is knowing that you’ll get spooked, yet sill want to see it.

The POV shot–using the camera to put the viewer into the shoes of the stalker or killer–really changed the game. Notably with Halloween (although Black Christmas was first). John Carpenter’s film and his unforgettable piano score was searingly memorable. I still watch the film today, over and over. It’s an example of passionately crafted work, done on minimum budget, but resulting in maximum impact; imagine coloring leaves red to emulate the Fall season!

Many dismiss Friday the 13th as a hack job of a horror film. That’s a mistake, though perhaps not quite worthy of an ax to the head or arrow to the Bacon neck. I’ll never forget reading the ads for it in comic books in the early 80s, to paraphrase, “People have died watching this film it’s so scary!!” The soundtrack, the POV shots, the death sequences. And: Kevin Bacon. F13 is a slice… a chop… and a decapitatingly timeless piece of work. Plus, don’t forget, it had a masterstroke of a twist. It perfectly completed the Hitchcock “homage.”

Nightmare on Elm Street then took horror films to the next level. It cleverly weaved a tale of a psycho “bastard” who could kill you in your dreams. Freddy Krueger is often remembered as an MTV icon, wearing Tom Cruise shades and sipping Margaritas on the beach. But before the caricatures that came later in the sequels, there was hard-core fear. And NOES 1 was a great example of no-holds barred, clever film-making. Not to mention it featured the film debut of an innocent looking Johnny Depp.

In 1999, the Blair Witch Project revived the genre. Who can forget that ending?

Later came the so-called torture-porn. It started with the fine, nerve-wracking film Saw, but quickly degraded as film-makers sought to capitalize on the excess that resulted in mindless expose.

Although I believe horror was at its zenith in the 1960s–Psycho, Rosemary’s Baby, The Exorcist–and 70s–Suspiria, Halloween, Black Christmas, Friday the 13th, The Omen–there are gems to be had in the modern day. Some such as Audition come from Japan. French film-makers produced a real zinger called High Tension. Then there was the recent The Descent, is a claustrophobic exercise in unknown creatures. Others are quirky indie efforts like May.

Here are some random thoughts on horror movie moments and films in general.

Best: Part 1 (head and shoulders above the rest), 3 and 4 (thanks to production values courtesy Finnish director Renny Harlin). The recent sequels (e.g. Freddy vs. Jason) have been utter garbage, attempting to capitalize on those that would prefer to watch action films.

This is in my top three horror movies of all time–it’s highly re-watchable. Psycho would be #1. But, man, is this one perfect.

One of the most dramatic opening sequences in horror film history. And the piano-plunky soundtrack by John Carpenter is instantly recognizable and terrifying. In babysitter Jamie Lee Curtis, a scream queen is born, and the rest is survivalist history.

Perfection. #1 of all time. Created the modern “twist” decades before it would catch on with mainstream film-makers.

Horror or sci-fi? A little of both. When a small alien creature explodes from your chest unexpectedly (or expectedly for that matter) I’m inclined to say it’s a horrific moment.

The original is best. But I like #2 and #3 as well. In fact, watching all three in a row can make for a devilish good time.

It took me a while, but I see the light… or the red, green, yellow dark. Argento is an Italian horror master. I watched Suspiria about twelve years ago and didn’t think much. Years later I watched it again. Then again. Finally, I began to get it. It helped that I had seen “Creepers” at the theaters when I was younger. But Argento is an acquired taste. I’d say it’s worth the effort. I simply love Suspiria, Phenomena (Jennifer Connelly), Tenebre and Opera. The films are dream-like, fantasy inspired. The furthest thing away from reality, and the better for it too.

When DVDs first hit, I went on a horror hunting frenzy. First, of course, I stockpiled on the classics such as Breakfast at Tiffany’s, Wizard of Oz, Lawrence of Arabia, The Sound of Music, Godfather, Taxi Driver, The French Connection, Goodfellas … you know, films for the masses – just so you know I’m not an utterly deplorable monster. Then I bought virtually every Hitchcock film know to man, including his much-loved Alfred Hitchcock Presents TV series (brilliant).

All the obscure stuff was there too like Valentine, Urban Legends (1, 2… and 3), Wrong Turn. Then I expanded into the Italians (Argento, Fulce), the Japanese, the Korean, the Spanish, the French… well, you can see, it’s easy to become obsessed.

I’m disappointed that mainstream horror today is devoid of creativity. There needs to be a return to roots. Story is the thing. It seems this malaise faces the entire film industry, not just horror. Who believes that faster cuts, and more effects result in a better final product? I say take away the money. Less resources. Instead: more creativity, more passion. For now, a lot of that comes from foreign markets.

Everyone loves a good chill, and a ghost story or two. It’s why sometimes you need to get cozy with your loved one, whether it’s in a drive-in theater (okay, home theater), a local moviehouse, or even the fun house at the local fair. As long as we are human, this innate ability to be ourselves–to be human–will continue to ensure horror films have a long, illustrious, blood-soaked future. Happy Friday the 13th. May it be followed by many successful sequels.