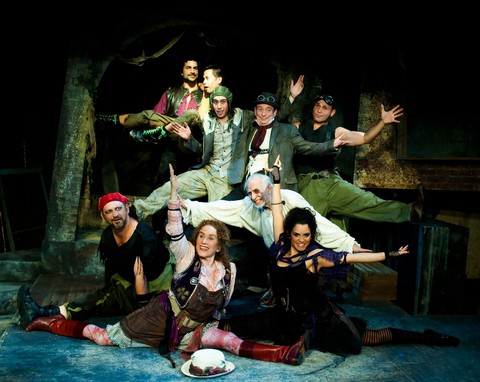 Live Tweeting, those spontaneous and often humorous 140-character outbursts sent using Twitter while watching a live event, has been used as a promotional technique across a variety of industries including sports, wine, and awards shows, among many others. Now, you can add theater to that list. The SF Playhouse in San Francisco will allow patrons to Tweet away—something typically verboten—at a special “Pluggers” performance of the creative musical, The Fantasticks (review).

Leave it to artistic director Bill English and team to once again push the envelope. In fact, they first tried Pluggers night back in May for a special performance of Slasher. Theaters have been seeking ways to drive attendance and create social buzz that will hopefully lead to a new, younger base of annual ticket subscribers.

“We were so thrilled with the response to our first Pluggers night and are excited to have them “plug” into our exciting, re-imagining of The Fantasticks,” said Bill English, SF Playhouse Artistic Director. “We thought this would be an exciting way to combine technology with the arts…and you get to do something you’re not suppose to do in the theatre!”

I’ve been following the trend over the years, invariably comparing it to wine. The latter industry has a significant headstart, having embraced Facebook and Twitter as ways to reach out to new, media-savvy audiences for quite some time now with significant results (witness the recent sold-out Wine Bloggers Conference in Walla Walla). TasteLive!, for example, brings together a community of virtual oenophiles who Tweet as they taste: “Too much oak, plenty of tannins. Age this baby” … and “I’m passing out, TTYL…”

In an email exchange with Dan Meagher, who runs marketing for SF Playhouse, I asked how the program was working out. His response:

“Theatre needs to start embracing social media (and media in general) and not look at them as the enemy. In addition, this allows us to generate buzz and exposure to the younger generation who may not initally have an interest in seeing a show. But, with a fun”text-pet” event, we may catch their attention, and in turn, turn them into a theatre fan.”

Here’s how it works. The Pluggers will sit in special “Tweet Seats”. Potential Pluggers should:

Each Plugger receives one complimentary ticket to the July 13th 7 PM performance.

Pluggers are invited by invitation. To apply, send your name, phone number, city, and link to your Twitter and Facebook accounts to Dan Meagher, Director of Marketing.

No doubt, it’s an exercise in publicity. However, it can make for entertaining spectator sport. Follow along and you may be surprised at some of the insights and clever observations Theater-Twits can make. For the performers, it can be a bit of a gag too, I suspect. Later, they can, in a sense, rewind their performance and see what their audience was saying about them, both good and bad.

Parting thought: Be fresh, be unique. Don’t worry about the “Little Man” you Twits! Not that there’s anything wrong with the icon, just his over-saturation gives me dizzy spells from time to time. Where are the new voices?

What: Be a Plugger at The Fantasticks
When: Tuesday July 13, 2010
Where: SF Playhouse, 533 Sutter Street, San Francisco, CA 94102
Why: Because your Tweet matters. Really?! Really… maybe. Just be clever, insightful, humorous, or deranged.