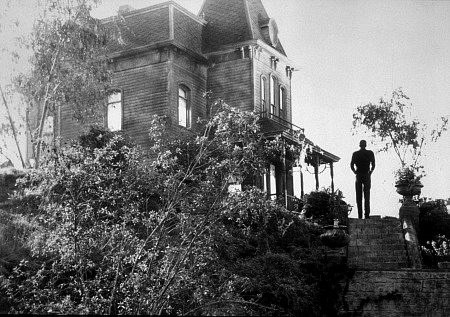 Viewing Psycho is always a memorable event—even for the hundredth time. But watching it as an orchestra performs the famous Bernard Herrmann score live alongside the film is an out-of-body experience. It may not drive me to matricide, but the euphoria could well induce me to stuff the nearest bird. Hey, we all go a little mad sometimes. On Saturday night, a date I had marked on my calendar about as far back as I can remember, the San Francisco Symphony screened the iconic movie as a precise strings-only orchestra performed the score, capturing everything from the elegance of the rolling melodies during Marion’s highway getaway to the staccatos of the shocking shower scene.

Over the past 50 years since it debuted to an adoring public, the black and white film has influenced filmmakers everywhere. It became the ultimate blueprint for the modern day thriller. Also, perhaps unwittingly, it would create a 60’s schlock-fest led by auteurs of camp such as William Castle (Straight Jacket, I Saw What You Did). In 1981, Friday the 13th would liberally borrow (to be polite) Herrmann’s score and introduce it to a new generation of horror film fans.

But Psycho is the gold standard (I rated it #1 on the SSC top 10 horror films of all time, probably not a controversial selection). There’s a reason why it’s studied in film school. Everything is magic here: the pacing, the structure, the plot (of course, what a story by Robert Bloch!), the acting (except for “Mr Stiff”), the innovative camera-work, and the mother-of-all-twists. The music, however, would ensure the imagery was indelibly seared into our collective conscious. Even Hitch would later say, “33% of the effect of Psycho was due to the music.” It was those screeching strings as the knife came down, again and again, that punctuated the jaw-dropping moment. Can the heart take much more?

On this evening—apologies to food and wine everywhere—the perfect pairing was stirring live symphony with a thrilling classic film.

As an experience it was unparalleled and lived up to the lofty expectations I had walking into the majestic (and surprisingly comfortable) Davies Symphony Hall. It felt like a throwback. There were no sticky floors, or cell phones interrupting our enjoyment. People swinged pre-show to The Martini Brothers in the lobby. And then the film did all the talking; there was no introduction, or remarks of any kind throughout the evening. What more can you say about Psycho?

Amazingly, Loni, my date once again—do I have a  choice in these matters?—was watching the film for the first time. Yes, that in itself is rather shocking. I wondered how she’d react. She hates horror films. But I told her this was a thriller, not at all like the poor, over-produced horror dredge they make today. So it was with great amusement that I watched her absolutely captivated by the story. She’s stealing the $40,000! I declare! Then later, she could barely keep her eyes on the screen, clutching at me, as Mother went to work. Oh, God, mother! Blood! Blood!

Intermission was well placed, at the most logical point; the deed was done, the car was sinking, and we headed out for a breather. The buzz was palpable. The sold-out crowd was loving the experience.

The ending still feels fresh and brilliant. Shadows danced on the large screen hanging about above the orchestra. Psycho has aged incredibly well. It warrants repeat viewings, if not for the trivia alone: a flushing toilet, the bra (white, then black), Hitch’s last B&W, Vera Miles’ wig, references to birds.

There are a few weak spots, including Jon Gavin who looks awkward throughout (see Hitchcock’s next feature The Birds; the chemistry between Tippi Hedren and Rod Taylor is tops, even if the film isn’t) and some of the later scenes seem unnecessary, as if to delay the inevitable trip to the house on the hill. Also, can you imagine: your sister is murdered and an investigator says to you, “He was aroused by her.” But who am I to say, this is a cinematic masterpiece.

Kudos to the San Francisco Symphony for staging some memorable events this summer. Two evenings of Final Fantasy music was followed by this performance of Psycho on Saturday night. The audiences (especially for the video game series) were notably younger than the core symphony base. All were having a smashing time. The hall was vibrant, alive. This is a great way to seed the future symphony subscriber.

If you get a chance to see a classic film with live accompaniment, I suggest you jump at it. It’s a reminder of a simpler, non-CGI film world. To experience it as I did at Davies Symphony Hall with Psycho sends chills down the spine. This weekend, we teed up the film in our home theater, and once again enjoyed it, followed by The Birds. A double billing. All I need now is a ’56 T-Bird.

All photos (unless noted) courtesy: Wikipedia.