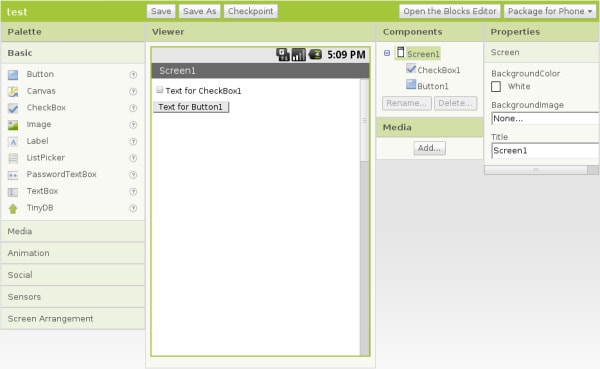 Google took off the wraps of its new build-your-own-app, “App Inventor for Android,” yesterday. Still in closed beta, the company has launched a Web site and published videos showing its power and easy of use. Using point and click only, without the need for a single line of code, users can quickly generate Android apps that run on smartphones running Google’s increasingly popular mobile operating system.

PC World reminisced: “It’s an exciting idea that’s more than slightly reminiscent of HyperCard, the brilliant visual programming tool that was a big deal on the Mac more than twenty years ago, and which is missed to this day.”

According to the site, Google hopes the new app will open educational possibilities: “The educational perspective that motivates App Inventor holds that programming can be a vehicle for engaging powerful ideas through active learning. As such, it is part of an ongoing movement in computers and education that began with the work of Seymour Papert and the MIT Logo Group in the 1960s.”

I like the idea. However, my biggest concern is one that has been already shared on sites like TechCrunch and Mashable: Will this lead to a flood of junk apps on Android Market?

In the race for App supremacy, Apple and Google are the new McDonalds. Apps are burgers, satiating a public ever hungrier for little morsels of entertainment and infotainment. Over 80,00 Apps! Over 100,000 Apps!

Many argue that this is simply a move by Google to help up their App count. While no doubt it will do just that, since it lowers the barrier to entry to creating apps, it really does open the door for educators and consumers-alike to experiment and create their own, unique apps (most I suspect will be so specific, no one else would care to download them). Google: “Apps you build can even store data created by users in a database, so you can create a make-a-quiz app in which the teachers can save questions in a quiz for their students to answer.”

Like Hypercard, it provides educators a way to explain the logic behind programming (building blocks, structure, decision trees, etc.) without having to dive deep – this, it seems to me, is a perfect entre into computing.

I expect Google will need to create a special section in Android Market for homegrown stuff. Or leave it out entirely, providing access only to a social circle perhaps defined by its creator.

At this point, like all red-rope Google releases, it’s available by invitation only. I have my request in. My first app will be something that automates the stunning of small animals, specifically cats.

Here’s a video of App Inventor for Android in action. It’s the hokiest I’ve ever seen come out of Google… why can’t they just produce normal videos (either they’re high-and-mighty, or, as in this one, appealing to cat owners)?