Yes, while I realize everyone and their dog (and possibly their cat, their mouse and their chicken) have written about the iPad. The reviews are bountiful, and available in every nook and cranny across the Web-o-sphere. Yet I finally had the chance to test one out earlier this week, and thought I’d just post a few initial impressions about the device. I feel compelled.

One note regarding sales. It seems Apple is doing just fine, having apparently underestimated demand according to some reports (which has led to a 1 month shipping delay overseas). Not a bad predicament for a mobile device that has received its share of platitudes andwith a healthy does of skepticism.

Can it really replace a netbook? Will us folks who already own several portable devices, buy yet another?

I don’t know I can answer any of those questions. The iPad is, unlike the smartphone and laptops, a personal choice. It’s certainly not necessary. If not a luxury item, it’s certainly a discretionary purchase, although at $499 it won’t exactly break your bank account. It wasn’t long ago we were all paying $2,000 for 7-pound laptops.

When I first picked it up, it felt heavier than I expected. However, it is gorgeously built. 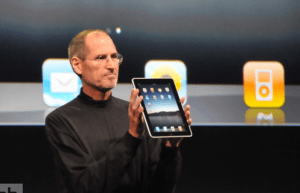 Like all of Apple’s products it feels solid and superbly engineered. I wonder how it would fare in a drop from four or five feet? Like dropping a piece of toast, you’ll probably have a 50/50 chance of getting the glass (i.e. the butter) side down, and cracked. Then again, a sleeve, or case of some sort is probably a must.

Beautiful. Vibrant. Feels large, which of course by iPhone standards it is. By netbook standards, however, it’s on par.

This thing is fast. The touch interface is very responsive. Swiping is nearly instantaneous, and the iPad picked up all my gestures without a hitch. It simply does what you want, when you want. Still, like most people I want multi-tasking! Apparently it should be coming in the fall. That’s good news as the iPad is the perfect device to listen to music while surfing or reading. The processor appears to be up to the (Steve) job(s).

I believe apps are Apple’s not-so-secret weapon. No other company can touch the quantity or quality available on iTunes for either iPhone or iPad.

Get ready for a plethora of “iPad killers.” For example, the HP Slate. I say impossible. Not close. Why? Apps. Sure, you can out-spec the iPad. That’s the easy part. The hard part is the software, the user experience, and, most notable, the apps.

I’m convinced apps are the way of the future. Funny that, it’s actually the way of today. After all, apps are just applications. But tinier and faster to install. There’s something about trying something new, and being able to use it in a matter of seconds. The “shrink wrap” days of the two hour install are long gone. Thank you!

I played with a bunch of apps, including all the standard fare such as iTunes, Music, Photos, Videos, Calendar, Contacts, Safari, iBooks, etc. All were just how I expected them to be: Excellent. Don’t forget, Apple’s been at this for a while. It shows. These are all mature (well, okay, iBooks is new) apps that have been tweaked to near-perfection.

Ah, yes, the keyboard. Can a virtual keyboard do the trick?

Yes: For short emails, updates to Facebook and Twitter, texting and updating your  list of things to do before you die, it will do just fine. I found landscape easiest. It gives the keys more space, and I can quite efficiently type with the iPad lying flat on the table. It would be even better with the case/stand I’ve seen that props it up at an angle.

No: For serious typing. Now way Jose. Anyone who suggests that the iPad can reach Notebook or Netbook-like typing speeds is chugging the Koolaid, big time. I just don’t see how it’s possible. If you write long documents, or even moderate ones, or like to get lengthy in your emails, then the iPad is not for you. It’s more about consumption, not so much about creation. Not that there’s anything wrong with that!

When I first read about the $499 starting price I was impressed. It was less than my prediction of $799. For a non-essential device it can seem expensive, but this thing does a lot; it’s a music player, video player, web browser, emailer, book reader. All rolled into one sexy slab. And let’s not forget the 10+ hour battery life. All of this, and it starts to seem very well priced.

Will I buy one? Probably not. At least not yet. I can’t think of a scenario where I would use it instead of my laptop. I constantly need to type. And when travelling, I really don’t want to carry the iPad in addition to everything else. Still, it would be a fun play-thing to have around the house, for reading the news, and even controlling multimedia devices.

I picture myself swiping the iPad while smoking a cigar, listening to the rat pack, and thinking, “hey, I am kinda cool!”