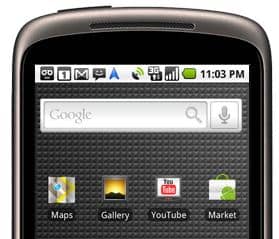 Google today announced that the high profile, but slow selling Nexus One smartphone would be available, unlocked, for $529 on AT&T. It will also be available in Canada on Rogers. With reported sales of about 135,000 units, the much-hyped phone sold directly via Google and running on T-Mobile, is not exactly lighting the world on fire. So far Google’s only answer, true to its open source roots: more phones, more places.

Unlike Apple, Google has wisely chosen to license the Android mobile platform to other vendors who in turn design and manufacturer handsets that are made widely available across multiple carriers such as T-Mobile, Sprint, Verizon. It gives Google a resource-rich ecosystem, countering Apple’s vertically integrated army of one.

And so far Google must be pleased with its fledgling OS. It has come on strong in a scant 24 months. Although it still trails RIM and Apple (and Nokia globally by a long shot) in market share, its making impressive gains thanks to the partner-oriented model. Everyone knows the game is mobile. Since more people are computing on the go, more ads will follow the eyeballs. And so goes the money. Ads are of course the core of Google’s business.

But there is a big problem Google needs to fix; an elephant in the room that goes under-reported.

That is: Google needs an answer to Apple iTunes.

Without it, mainstream consumers are unlikely to ever purchase an Android smartphone. To date Google’s efforts have clearly been targeted on younger, tech-focused early adopters (like me, except for the young part). In fact, probably representative of the very people working at Google. This is a smart first move. The early adopters can be fickle, but they can also be very loyal.

With names like Nexus One, Droid, Eris, Behold, it’s no wonder that tech jocks everywhere gravitate to the device. That’s all fine and good, but Google’s ultimate goal is market share, and to get there they need to expand the addressable market. No, that doesn’t mean offering pink smartphones, although undoubtedly that would help I’m sure. Rather, at some point they need a content ecosystem like iTunes.

On Android, donwloading content such as music, movies and podcasts for example, is a kludgy affair. The default music store is Amazon MP3, which works well enough. For podcasts, though, you need to load a separate application called Listen by Google. These are all fine standalone apps. But there is no way to manage everything in one place or sync to your laptop.

For round 1, Google has done well to put Android on the map. Its open model is working. And even if Nexus One sales aren’t exactly robust, it still demonstrates that the company can make waves in a new industry using a powerful approach of integrated Web apps, search, and partners.

For the next round, and to survive long in the rapidly evolving mobile game, Google must now crack something it actually knows very little about: the mainstream, Mom & Pop consumer that values simplicity over tech prowess.