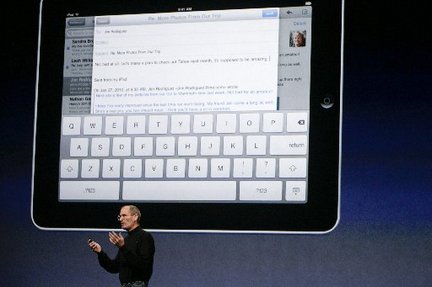 Apple (AAPL) announced today that it would start taking orders for its iPad, the biggest tech product in years, starting March 12. Units, though, won’t reach consumer’s itchy, news-loving hands until April 3, a few weeks later than originally planned. The 3G version which will enable mobile Internet using the AT&T cellular network, will need to wait until “late April.”

There’s little doubt the Apple iPad will be the best tablet PC on the market. It features all the hallmarks of Apple’s first rate industrial design, most notably a slim form factor that will make it easy to carry the 10.1″ device around.

The big question on everyone’s mind though: will it transform the industry?

Many see iPad as the savior of the magazine industry, and the death knell for newspapers. Others suggest it will kill the netbook market. Although that could be a tough one. Typing on the iPad will utilize an on-screen, virtual keyboard (like smartphones only much bigger). Unless there is some kind of real “magic” there, it could mean the iPad will be the ideal content consumption device, but netbooks (and laptops) would still be the choice of those that need to create content.

Meanwhile, Apple stock hit an all time high at just above $219, making the company worth almost $200B. It appears investors believe the iPad will be another hit for the company and unlock a torrent of new revenue streams.

The hits, they keep on a-comin’: Mac, iPod, iPhone. And now the iPad. Shareholders must be in iHeaven.