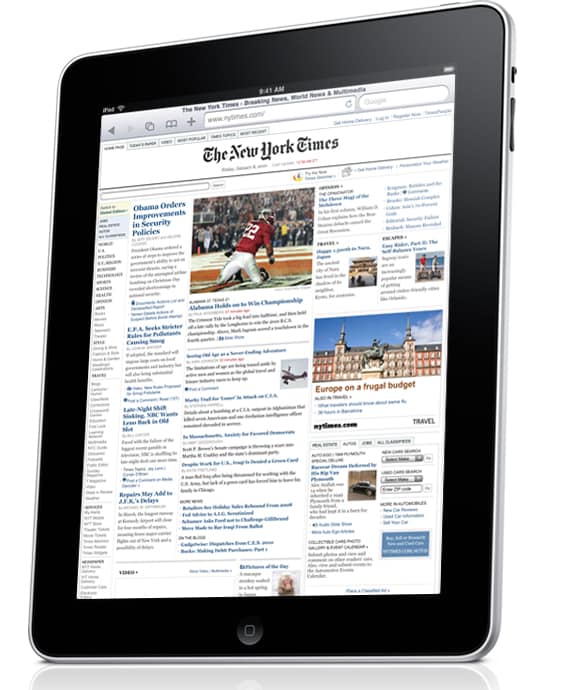 Many tout the upcoming Apple iPad as the end of the netbook. That’s hard to believe for one simple reason: typing on the thing is going to be difficult. Unless there is some real input “magic” on the device that has yet to be revealed, I see it more as the savior to the newspaper and magazine industry then I do a netbook killer.

And that’s not a bad thing. However, when Steve Jobs digs in his heals, he can be the most stubborn of oxes. Build a netbook? Apple? No way. Too pedestrian, for bottom feeders. Not for a grand design, game changing company like Apple. Thus Apple iPad, slotted between the iPhone and MacBook. A bona fide mobile devices company is born. Well, at least the marketing speak is.

I don’t think the booming netbook industry is facing doom anytime soon. Evolution perhaps, as manufacturers figure ways to build hybrid devices (such as the Lenovo S10-3t tablet netbook) that capture the best of both the traditional netbook keyboard along with the ease-of-use of touch screens.

So, here are my top reasons why the Apple iPad won’t kill the netbook and 3 reasons why it will save newspapers.

1. It has no answer to the speed of a physical keyboard

Yes, it does offer a virtual keyboard. But how do you type quickly on that? It will require both hands which means the iPad must be sitting on a horizontal surface, and would require someone using it to be hunched over staring down.

People love travelling with netbooks and laptops because they are just so darn easy to use on a lap while sitting in an airport terminal for example. The iPad, on the other hand, will be more suitable for reading like a newspaper or magazine.

3. It’s much more expensive than a netbook

Granted $499 is not bad for an uber-sexy new product such as the Apple iPad. However, netbooks can be had for about $200 less and even come with more expandability and connectivity. I expect this to change in 12-18 months as Apple (as they typically do) finishes squeezing extra margin out of early adopters and lowers the price to $199 for an entry model. Mark my words!

But, Apple might save the newspaper and magazine industry because…

4. iPad will be easy and fun to use

The success of Amazon Kindle proves people will read books on digital devices that are done right. Although it has no digital ink technology (yet), the Apple iPad could be the equivalent for newspapers and magazines because of the rich, intuitive reading experience it provides including full color in a format that resembles a standard sheet of paper (albeit slightly smaller). The key though: Apple will make it fun. New versions of sites such as Wired, The Wall Street Journal and USA Today will positively blow people away on the iPad. Magazines too will look more glossy than ever. Plus no more marching to the recycle bin with a stack of old BusinessWeek magazines.

5. The marriage of iPad plus targeted profiling is an advertiser’s dream

Think mobile ads are a big thing now. Wait until iPad. I predict an unprecedented amount of new types of highly targeted ads will emerge that drive all sorts of new revenue streams for advertisers thus boosting the prospects for publishers that depend on them for revenue.

6. Ink stains on fingers will be a thing of the past

You’ll no longer have to scrub the black smudges off your hands every Sunday morning. Hallelujah!