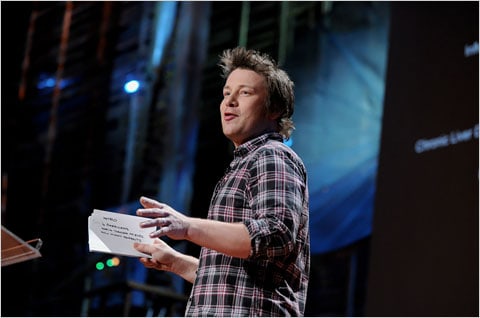 The TED conference this week awarded its top prize of $100,000 to Jamie Oliver who wants to “educate every child about food.” Here, here! I think this is a savvy choice.

About 1,500 people watched live in Long Beach California at the progressively influential conference. Past winners of the TED Prize include Bill Clinton, Dave Eggers and Bono. Not bad company.

Amazingly, at least according to Jamie Oliver, this generation of children are expected to have a shorter life expectancy than their parents. Not by just a few months, or years. He said in his presentation that it could be up to a full decade shorter.

Can this be true?

If so, it’s shocking, and if I’m following the logic here, it can all be traced back to the unhealthy, high in sugar, food lifestyles that today’s children are growing up on.

This is not the first time food in America has been critiqued. A number of books have also been published on the topic, including In Defense of Food and the Omnivore’s Dilemma.