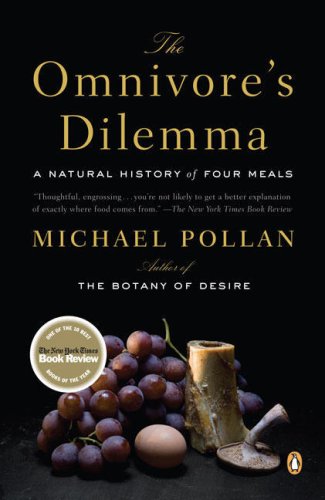 Michael Pollan, in ‘Omnivore’s Dilemma’ attempts to trace back the history of four very different meals: one from a fast food chain, one based on the multitude of Organic-labeled food, another from a sustainably-farmed meal and finally a meal that was foraged by the author himself.

If you don’t know how your food is grown, transported and/or processed before it hits your mouth, Pollan will pull the blindfolds off. Even if you think you have some idea, the first hand accounts by Pollan may shock you as it did I. The field trips across time and space will take you to corn farms, cow processing plants, chicken farms, and even out into the wild forests in search of chanterelles, a wild fungi that seems to only grow at the foot of oak trees.

The purpose of this mission is not scientific although many of Pollan’s observations may lead the reader to ask many questions about the science of food production. Instead the focus of Pollan’s exploration is the belief that we should understand the true impact of the food choices we make and the connections we have to nature as part of the food chain.

Being creatures that can choose to eat anything (seeking new discoveries in foods, passing down food traditions, crossing off poisonous ones), Pollan contends that we need to know how our food is grown, processed and transported so that we can make informed choices. In the end, we, as readers, are left to make our own decisions about the food we purchase, the institutions we support and the ethics behind our eating. However, Pollan by taking the reader through his first-hand experiences ensures we have no reason to be ignorant or misinformed.

A couple of the most poignant imagery for me from this book:

In the section profiling Polyface Farm, Pollan accounts an incident where he was privileged to watch a bunch of pigs aerate a pile of cow manure digging for forty-proof corn and in the process turn the manure into rich compost to be used on the farm grounds. Pollan notes:

But the cliche that kept banging around in my head was “happy as a pig in shit”. Buried clear to their butts in composting manure, a bobbing sea of wriggling hams and corkscrew tails, these were the happiest pigs I’d ever seen.

I couldn’t look at their spiraled tails, which cruised above the earthy mass like conning towers on submarines, without thinking about the fate of pigtails in industrial hog production. Simply put, there are no pigtails in industrial hog production. Farmers “dock,” or snip off, the tails at birth….Piglets in these CAFOs are weaned from their mothers ten days after birth (compared to thirteen weeks in nature) because they gain weight faster on their drug-fortified feed than on sow’s mild. But the premature weaning leaves the pigs with a lifelong craving to suck and chew, a need they gratify in confinement by biting the tail of the animals in front of them. A normal pig would fight off his molester, but a demoralized pigs has stopped caring. “Learned helplessness”…is not uncommon in CAFOs, where tens of thousands of hogs spend their entire lives…crowded together beneath a metal roof standing on metal slats suspended over a septic tank. (pp. 217-218)

For some reason, the thought of being so demoralized that I didn’t care if someone was chewing on my ear struck a deep cord in me. The theme of “animal suffering” struck a further cord later in the book on page 317 when Pollan describes the fate of the American laying hen:

…American laying hen, who spends her brief span of days piled together with a half-dozen other hens in a wire cage the floor of which four pages of this book could carpet wall to wall. Every natural instinct of this hen is thwarted, leading to a range of behavioral “vices” that can include cannibalizing her cage mates and rubbing her breast against the wire mesh until it is completely bald and bleeding…the 10 percent or so of hens that can’t endure it and simply die is built into the cost of production. And when the output of the survivors begins to ebb, the hens will be “force-molted”—starved of food and water and light for several days in order to stimulate a final bout of egg laying before their life’s work is done

This passage shocked me as I have been garnering quite a bit of my protein from egg whites. Needless to say, the next visit to Trader Joe’s, I picked out the cage-free eggs that were about $1.40 more expensive per dozen…well worth it.

What adds to the credibility of this work is that Pollan stays pretty balanced, documenting his experiences from his perspective, but leaving the reader to make their own decisions. I am not a vegetarian, and not sure I ever will be, but after having read this book, I am more conscious about the diversity of my food and lessening the animal suffering that goes into the treatment of what I eat.

Pollan makes an astute observation that in many other areas, people have a general notion that “you get what you pay for”. However, this concept is lost on food as there is little marketing of the quality of blueberries from one farm vs. another. Instead, the government has issued standard grading and everything is considered uniform even when it isn’t. Over time as differentiation is removed in marketing, the products do become common with the extreme example being industrial corn. There is even the “cost of living” index which is based solely on prices, not any indication of quality or environmental impact.

However, one of the issues that Pollan doesn’t address is the connection between something he noted earlier in the book and another concept deeply explored related to sustainable farming. In the earlier part, he discusses the fascinating discovery of fertilizer which has enabled increased production of food and thus higher population levels. Pollan even goes as far to say that if it weren’t for fertilizer, a good portion of us would not even be in existence today. This assertion echoed in my mind when he describes Joel, owner of the sustainable Polyfarm, discussing the impact of the adjacent forest to the farm and how much land is really needed for a sustainable farm to exist. Pollan never connects these two themes, nor does he bring up the question of the rise in human population and its impact on our relentless need to gain efficiencies in our agriculture production. Besides supporting local farmers and sustainable farming, are there hard questions about the trade offs between quantity and quality of life for the human population?

Overall, this book was an eye-opening and fascinating read that will leave you contemplating your own eating habits. Beyond our food production, I think this book also has relevance in how we think about progress and the impact of systematic “efficiency”.