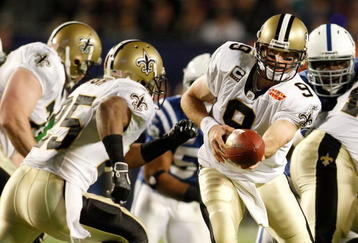 Every now and then, I just need to take a deep breath, look in the mirror, then write a post about one of my semi-respectable predictions. It’s rare and I need to take what I can get.

First: great game. Even throughout. High calibre quarterbacks. Brisk pace. Strong finish. I like the Colts, but I really wanted to see the Saints take it. I remember the days when they were the “aint’s” and fans wore bags over their heads. Loni had no idea what I was talking about.

Half-time show: good. I liked seeing The Who perform. I realize their just slightly past their prime, but they looked pretty darn good. And that set, not bad for a makeshift Super Bowl stage! It was nice for a change not to see a plastic band, lip-syncing. Although, on Twitter at least, many are scrutinizing Roger Daltrey’s lips, contemplating said backing track.

And, who (who!) can ever get enough of the Pete Townshend windmill guitar licks… and I’m not even a huge The Who fan really. But I do appreciate the history on display, the moment. This is Rock ‘N Roll.

Some one Tweeted that hell had frozen over; Google had run a television ad. Actually, not quite. Hell has frozen over, because the New Orleans Saints won the Super Bowl. I’m so glad I got to see it.

The party: perfect. Too much food. Too many drinks. Overly gracious hosts. Thanks to Jay and Judy for a special time.

The calls: Is Sean Payton gutsy or what? First, I thought it was a disaster when Bush couldn’t make the end-zone in a questionable fourth down call early in the game. Then, that onside kick in the second half. Who saw that coming? Once the Saints recovered you had the feeling this might be just their day.

The city: congratulations to New Orleans, a proud city, that deserves a celebration or two. And what better place, the birthplace of so much historical music, art, culture.