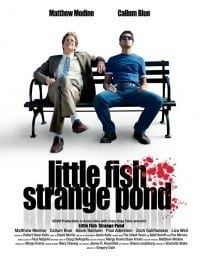 Okay, so here we go, let the flood of film begin. Exciting times. We’re 20 days away from the opening night of the Cinequest 20 film festival, and based on the amount of social media interaction, news, and announcements, it’s going to be a great one. Last week we received 10 screeners at the media launch party, and we’ve finally started to, well… screen them.

I’ve already learned at least one new thing: the PS3 will not play PAL DVDs, and several of the films being from Europe are in PAL format. Those we’ll need to watch on a laptop. So we’re starting with the North American releases first—yes, I know, how ethnocentric you say. Blame Sony.

And, yes, this is indeed a strange pond. Also quirky, interesting and unique. All characteristics for a fun evening of independent film. No doubt, though, this one’s likely an acquired taste.

Adam Baldwin (Chuck), not of the Baldwin family, plays a boozing, eclectic cop in a juicy supporting role.

Billed as a dark comedy, this one mostly hits the mark. Modine plays his role with an odd English accent the entire time, perhaps part of the imbalance. The camerawork is busy. Often, too many cuts and angles are used to capture, for example, a relaxed conversation on a park bench. Loni and I both wondered what size monitors the editors used. We screen on a 120″ home theater, so the zooms, 360 shots, close-ups can sometimes distract from the dialog. Still, it is visually pretty.

Director Gregory Dark definitely has a style definito. His pedigree in music videos (Britney Spears, Onyx), horror (See No Evil) and luxury bordellos (New Wave Hookers) all come to bear in this film.

Recommended, but demented. Not for the feint of heart—although Loni made it through. A good start. Now, only 75 more films to go.