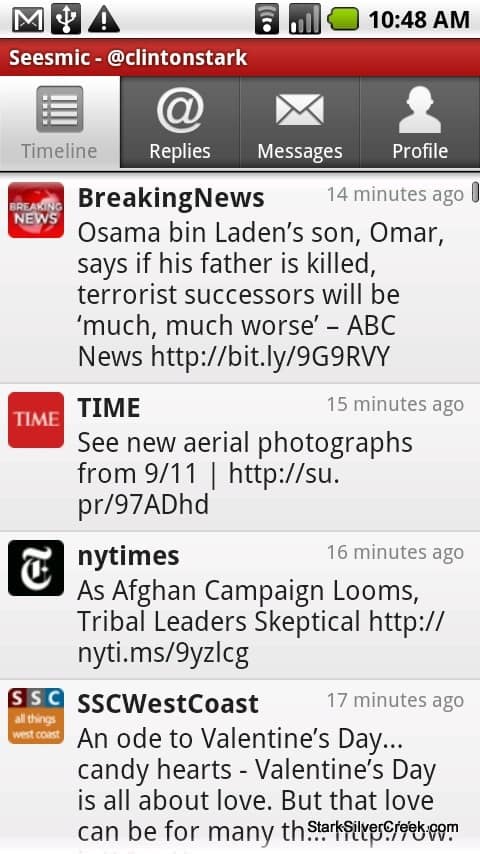 4.5 out of 5 stars - 'Right on the Money'
VERDICT:
"Right on the Money"
The best Twitter client for Android. Feature-rich, with multiple account support, strong search, lots of services support. Highly recommended for Tweets on-the-go.
Review by Clinton Stark

Seesmic is now the go-to Twitter app for my trusty Droid. The quirky red raccoon icon sits right on my home screen next to Facebook, Gmail, Calendar, Google Voice, and a shortcut to a special contact called Loni Stark.

There are many Twitter apps available free on Android Market, and for a while I was a die-hard Twidroid fan. I still like it, but Seesmic has raised the bar over the past weeks. The latest update added multi-account support, something you had to pay for on Twidroid. Add to that a strong list of service support, such as Bitly URL shortening and six different photo and video services, and you have a winner.

Seesmic, along with TweetDeck, is one of the Twitter Daddy’s of the desktop.

They’ve been continually innovating, staying up-to-date as Twitter itself has gradually morphed (adding a new Retweet option for example). The fact that Seesmic CEO Loic Le Meur is so likable is icing on the cake. His communications and updates are down-to-earth, perhaps belying the success, growth his company is experiencing.

On a panel recently in France, he tried to keep a train wreck of a keynote by Gary Vaynerchuk under control with charm and class. Or  maybe it’s just a French thing, what with all our behind-the-scenes video work with the Cirque du Soleil OVO team recently.

The app itself has all of the necessary Twitter functionality: timeline, replies, messages, profiles.

I don’t need to go into details here, as every fan worthy of a Tweet knows the deal. The interface is well laid out, simple and easy on the eyes. I particularly like the subtle background shade that adds welcome contrast to the text.

Recently, customizable text size was added (Google, please add this to Gmail!). The app will remember your position in the timeline, so you’ll know where you left off.

There are a couple of minor issues. I wish there was a way to jump to the top of the timeline. Currently I need to scroll all the way back up manually. There may be a shortcut here I’m unaware of.

This is not just a fault of Seesmic, but I would like to eventually be able to swipe from timeline to replies to message, etc. instead of pushing one of the icons at the top of the screen. This would open up more space as those shortcuts would no longer be needed. This is an area where Apple iPhone apps still rule. Perhaps it’s just a matter of time before us Androids get more of the sexy.