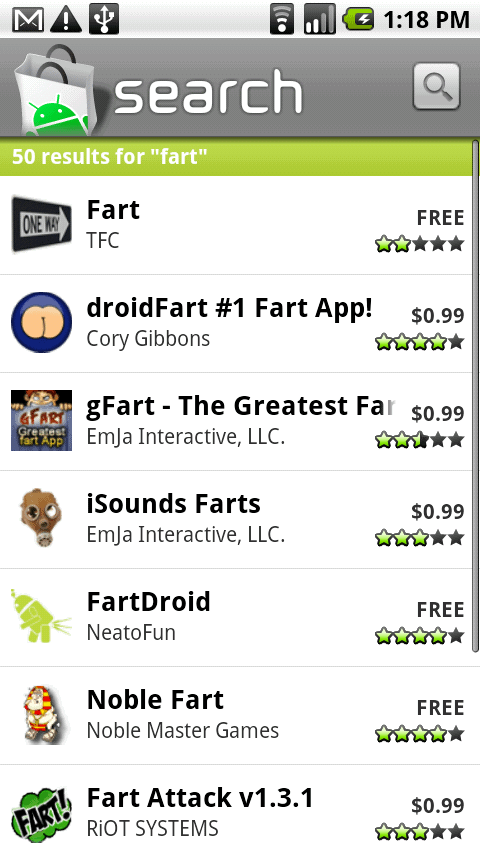 Or at least a fun mobile phone party prank. Especially if you own an Android-powered mobile smartphone.

Type in “fart” in the Android Market and you’ll find over 29 apps that will satisfy your inner bachelor. Plus you’ll be the star at the family holiday gathering with hits like FartDroid, Fart Attack v1.3.1, 101 Farts, Fart Machine 2, Pull My Finger, Sneaky Fart, and my favorite, Fartbot 3000. For special occasions may I suggest Noble Fart.

Seriously, though, the Android Market is, not surprisingly, exploding. In only a few short months, the number of apps has doubled to 20,000, with growth accelerating according to Androlib. Over 60% of those apps are free.

This is great news for Google. No doubt, excessive gas aside, apps are a strong indication of developer commitment and investment in the platform.

With truckloads of new phones from HTC, Motorola, Samsung and others (Google?) arriving in 2010, Android is a sure-fire, big-time winner, and the only legitimate threat to Apple’s iPhone and iTunes dynamic duo.

But, there are some issues.

First, because the Android Market is open and any developer can publish an app, the place is littered with spam-like scammy apps. Apple on the other hand, which employs an infamously tight approval process, is like the new Time Squares in comparison to the seedy red-light of Android.

That may be changing, though.

It appears Monseta and his truckload of stink has been kicked to the curb by Google. These apps are no longer in sight.

Another example was the New York Times app, which was actually great. I used it to browse articles on the Droid. Turns out, though, it was another non-sanctioned app, not at all related to the actual New York Times. It too has been removed.

So it would appear, at least for now, Google is using a post-moderation approach. Censorship and control is still there, but it comes later. Possibly related to the user feedback button that allows users to file complaints against specific apps.

Another issue: finding apps is getting more difficult due to the lack of a desktop (or Web) equivalent of Android Market and a limited browsing app.

Apple has the significant advantage. By a long shot. With iTunes you can browse apps easily across multiple categories, and sub-categories.

Also, another challenge for Google: beefing up SMB (small-medium business) and Enterprise capabilities.

For example, one of the primary uses of mobile phones for businesses (including ours) is for customer relationship management (CRM). On the fly, we want to look up customer data, update leads, track deals, etc. But, Salesforce and Sugar (the most popular open-source CRM offering) apps are non-existent today on Android market.

Seems like Verizon already knows it has some work to do on the business marketing front. Today they issued a press release DROID Does Small Business to reinforce its business readiness.

I’m confident that Google will make significant improvements with the Android Market and its SMB/enterprise capabilities in 2010. If anything, Google has proven, once again, that when it wants compete in a market it doesn’t just blow gas.