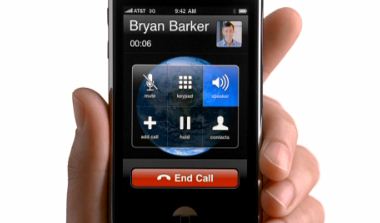 Set to launch tonight, Apple wants to set the record straight with a new ad campaign for its flagship iPhone. It seems that Motorola and Verizon have found a way to get under the skin of the previously unflappable titan of all things gadget cool.

In recent weeks millions of dollars has been sent on promoting Google’s new mobile operating system, Android, and handsets from several manufacturers—HTC, Motorola, Samsung—that run it.

The Droid smartphone, launched just a few weeks back on Verizon (and covered on SSC by Clint in his ongoing and perhaps concerning love affair with the device), in particular stirred things up with its “iDon’t” campaign targeted directly at the Apple iPhone. In particular, the ads focused on the iPhone’s inability to multitask, its lack of open development and the forever sealed non-user replaceable battery. Stuff of nerds no doubt.

Then again, with a name like Droid, what do you expect?

Apple, no slouch when it comes to mano-a-mano death matches (witness decades old Microsoft slugfest), is striking back, starting tonight. Taking aim at Verizon’s key network weakness—that is the inability to run voice and data simultaneously (if you receive a call, for example, on a Droid, your data connection stops receiving information)—the two new TV spots will air on three networks: “House” on Fox, “Dancing With the Stars” on ABC and “How I Met Your Mother” on CBS.

Also adding to the multi-layered drama is the ongoing (now legal) battle over Verizon’s use of AT&T’s 3G coverage maps to demonstrate their competitors apparent, ineffective coverage.