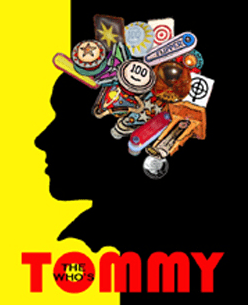 ‘Tommy’, the infamous rock opera by Pete Townshend of The Who, is legendary stuff. Many a childhood was forever changed thanks to that record. It became the soundtrack of a generation; a teenage wasteland.

The musical is based on the 1969 double album which tells a loose story about a deaf, dumb and blind boy who becomes the leader of a messianic movement. It was inducted into the Grammy Hall of Fame in 1998 for “historical, artistic and significant” value.

The Coastal Repertory Theatre, a non-profit community theater based in Half Moon Bay, stages a grandiose production. The 200-seat theater is quickly immersed in guitar licks, historic video vignettes, spiraling acrobatics, and, of course, introspective musical numbers. The material is at times dark and challenging, lifting the show beyond lightweight status.

The opening is superbly crafted by director Michael Lederman (also the artistic director of the Coastal Theatre). Spanning ten years, we watch Tommy enter the world to parents torn by the Vietnam war. For a moment we believe Tommy’s father is MIA, only to later see his return to a family which had moved on. The resulting violence apparently forever scars young Tommy. Through clever use of video projection, music and onstage action, the story unfolds with entertaining and stylish touches.

Later in the first act, we witness more of Tommy’s disconnect with the world, his family and friends. The production might soar here, but it does alright within the limits of the acting and singing abilities of the actors.

Cousin Kevin (played with Green Day like zeal by Brendan Quirk) steals the first half with gusto and absolute commitment to word and song. His bully provides a nice counterpoint to Tommy’s perpetual “Can you hear me?” catatonic state.

When the older Tommy (Bobby Conte Thornton) finally comes to life (“I’m Free”), the show picks up momentum again and revels in freedom, human spirit and all-out love. Bobby Conte Thornton’s voice (and look) is perhaps more Jonas Brothers than Daltrey, but his energetic spirit is hard to resist.

With a cast of over 40 actors, it’s impressive. At times, though, musical numbers seem programmatically robotic instead of emotionally rousing. Part of that might be creative intention, given the backdrop of anti-war movements, self-discovery and child molestation.

I thought the mirror scenes (such as “Go To The Mirror, Boy”) were haunting and effective. Other scenes, such as the “Acid Queen” didn’t quite seem to click, coming across like a smorgasborg of tattered gypsy dancers rather than social or political commentary.

The curtain call is a winner. Set to The Who’s ‘Teenage Wasteland’ with lyrics scrolling on the projection screen, the actors let loose and rally the audience to participate, both with vocals and on-stage dancing and celebration.

‘Tommy’ is community theatre done right. It never pulls punches, challenges the audience and delivers two hours of all-out psychedelic energy. It’s enough to make me dig out some old vinyl and re-listen to The Who.