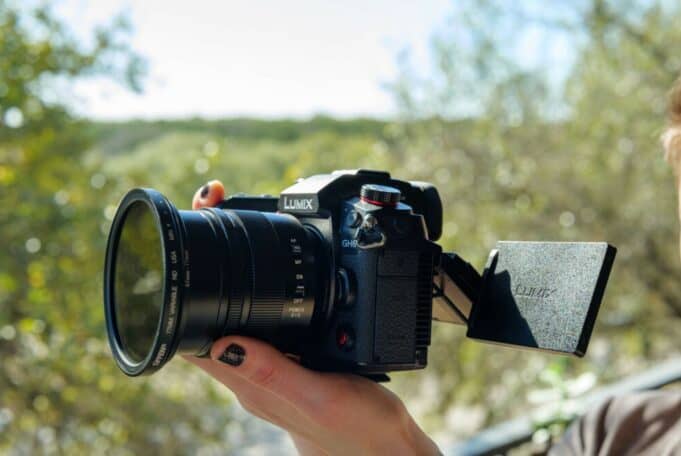 Panasonic finally took the wraps off its widely anticipated follow-up to the GH5.

The new Panasonic Lumix GH6 shoots up to 5.7K video, includes V-Log (no longer a paid option), and features a brand new 25.2MP sensor — the largest ever for a camera of this kind.

Panasonic says the camera will ship in March and retail for $2,199 USD.

One bit of significant news surrounding the release I did not expect: built-in support for Apple ProRes (422 HQ and 422). Having an industry standard codec right in camera without having to use something like an Atomos external recorder will be a huge plus for those who prefer to keep their video rigs nimble and lightweight and yet support a professional workflow.

Other things to note from this week’s livestream launch event:

Unlike the GH5 which featured passive cooling the GH6 gets a fan, presumably to deal with the heat generated by the high frame rates and resolutions. And, again, this is a Micro Four Thirds (MFT) so the body is quite small, and managing heat is surely a challenge.

Although the GH6 will likely appeal mostly to those interested in video, I should point out that the GH6 does have a high-resolution mode for photos. By combining multiple frames (without a tripod no less) into a single photo you can get a 100MP image. In testing that feature on the S5 I found the results outstanding so I’d expect similar results with the GH6.

To read the most comprehensive review of the GH6 I’ve found so far head on over to Newsshooter — it’s actually a mini-series consolidated into a single blog post, quite impressive that!

First, this is a stellar camera. It’s jampacked with everything a modern day video shooter or filmmaker could want. We’ve seen this all before in the GH5 and with the GH6 things just get more refined, with a nice uptick in specs where needed (5.7K, ProRes, new sensor, CFexpress). No doubt this will be short-listed by many potential buyers.

And, the price is, indeed, right.

I was surprised. Like many I was expecting the GH6 to go for around $2,500. But for $2,199 this thing offers some decent bang for the buck. Here in the States there’s even a promo (already!) that nets you a 128GB CFexpress card with a $199 value. So the deal gets even better.

However, there’s perhaps a caveat. Or two.

The competition for one thing. It’s pretty intense around this price point. Cameras that come to mind here include the Sony a7 III, Nikon Z6 II, Canon EOS R6 and the Blackmagic Design Pocket Cinema Camera 6K (with free DaVinci Resolve). Plus, don’t forget Panasonic’s own Lumix S5. That’s a pretty sweet camera for video, and features a full-frame sensor and modern L-mount.

Speaking of modern. That’s perhaps the Achilles heal of the GH6 — or it could be to many who are invested in newer Sony, Panasonic and Canon gear. It’s a camera, in 2022, still based on the aging MFT/M43 sensor and lens mount. These days full-frame is all the rage. The narrower view and perhaps flexibility of the smaller sensor in the GH6 could hamper some projects.

Finally, I wonder if the GH6 will still have that video-ish image quality I found was all too common on the GH5? In post I would almost always use FilmConvert and/or Lumetri to grain the heck of the video. When I shoot on a RED and use Redcode this is not required, as those cameras don’t do any in-camera sharpening or noise reduction. The RED look, to me at least, is organic and a close approximation to film. In any case this will be something to keep an eye on as the GH6 reviews roll out. In the end, though, there’s plenty of tools you can use in your editor to smish and smush the image however you like so this might be just a needless concern.

For me, I’ve never found that to be the case when shooting video projects here on Stark Insider with the GH5. In fact, I prefer the compact nature of the system, and like the field of view the camera provides. Also, MFT lenses tend to run on the cheaper side. A nice bonus for those first getting into the industry.

Despite that concern I think the GH6 is a feature-packed monster. You really do get a lot for the money here — supply chain concerns be damned. Again, $2,198 USD is impressive for a camera with 5.7K video, 4K/60 4:2:2 10-bit, and internal ProRes recording. I’m not sure there’s anything quite like it in this price bracket.

Okay, if you want the best auto-focus forget the GH6. Just go with Canon or Sony.

But for the hardcore manual focus types, those who revel in the filmmaking process and aren’t necessarily into the YouTuber or Vlogger shtick, the GH6 ticks all the right boxes. ProRes alone probably pushes this one over the top.

Ultimately, the GH6 is like that tantalizingly fully optioned car on the lot. Except it’s the one built on a platform that’s getting on a bit.

UPDATE: Jordan and Chris have their Initial Review up at DPReview TV. YouTube embed below. These guys really are the gold standard when it comes to camera review videos.