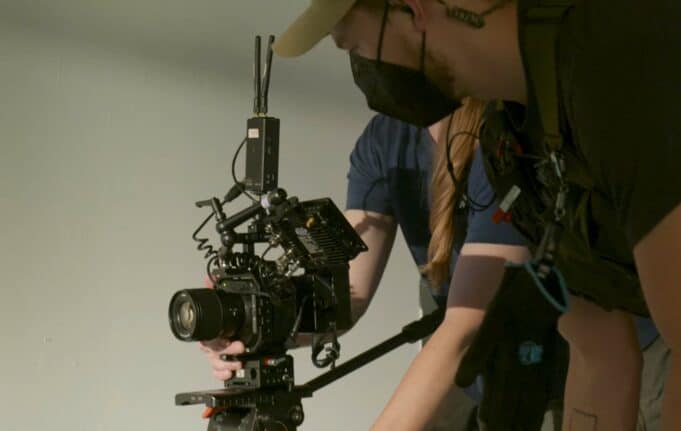 Not much mirrorless camera news these days. After a few years of seeing several new releases — Panasonic S1H/S5, Sony Alpha a7S III, Canon R5/R1/R3/R, among others — things have slowed.

Perhaps that has something to do with the ongoing chip shortage and global supply chain issues. Or it could be that, as I’ve theorized before, our phone cameras have gotten so good (especially the new iPhone) that we no longer really need a dedicated camera.

Nevertheless, Panasonic has revealed an interesting box camera. Called the BS1H it’s essentially a Panasonic S5 in… a box. Meaning, there’s no traditional camera grip. Instead it looks like many other pure-play cinema cameras like the relatively new RED Komodo or something from Kinefinity. Squint and you may think for a sec this is reminiscent of the Blackmagic Micro Cinema Camera from back in the day (bad ergonomics, good camera).

As always Newsshooter has a lengthy look at the new Panasonic BS1H so no need to go into that here. But here’s the key features (from the Panasonic announcement email): 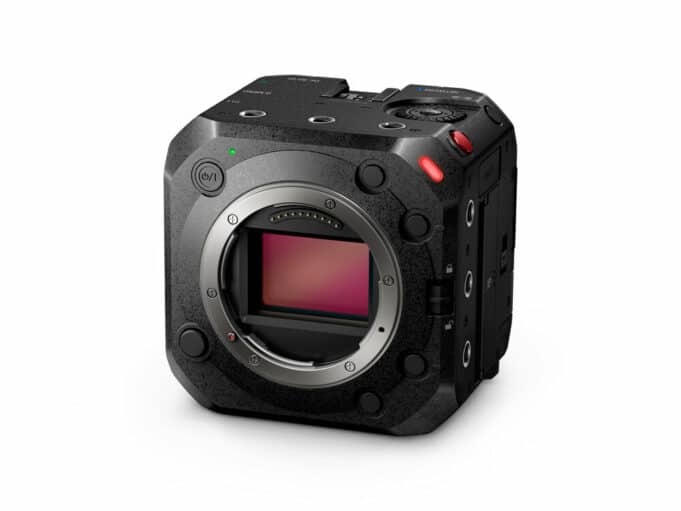 Also, I should point out that this mirrorless camera features the L-mount.

Panasonic appears to be emphasizing the BS1H’s live streaming appeal. There’s remote control and 4K 60p streaming and genlock and timecode. That’s all well and good and should attract a certain buyer.

Aside from that, though, I think this is a really neat camera.

If you’re solely into shooting video then this could be an attractive buy. You get that beautiful Panasonic full frame image (I can attest when I tested the S5 how gorgeous it is… organic, far from the digital look I used to get on my GH5), V-Log for grading flexibility and plenty of monitoring options should you want to capture Blackmagic BRAW or Apple ProRes RAW.

Of course if you’re at all interested in a true “hybrid” and want to flip a switch and take some old fashioned photos then you’ll need to look elsewhere, including some of the aforementioned cameras from Sony, Canon or even Panasonic which has a strong line-up. 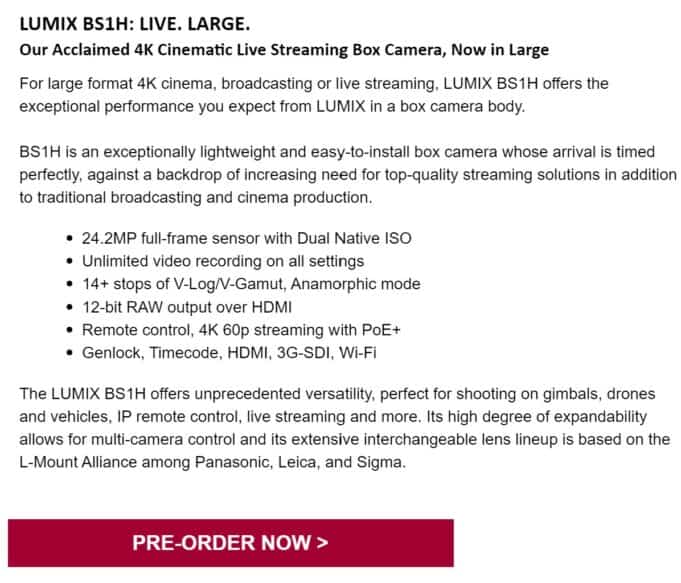 That the BS1H is a box camera is perfect for those who need crash cams, or want to fly it on a drone or gimbal. Flexible mounting points make adding accessories easy. No doubt, you can kit this thing out in any number of ways.

Loni and I are still shooting — reduced schedule and all — on a RED Dragon (Scarlet-W) as most if not all our Stark Insider video projects are now shot in studio with lots of planning, and structured camera movements. The live events around the Bay Area are long gone for us now. So we’ve sort of shifted from run-and-gun projects to storyboarded stuff. For better or/and worse.

RED spoils with its Redcode RAW codec. It’s magic. In Premiere Pro you can play around with those digital negatives as if it was virtual Play-Doh. I find it incredible that you can change the ISO dramatically and not introduce noise. Or shape the color and shadows and alter the image far and beyond what was originally captured in camera.

Still, as good as RED is, once travel picks up again I will like to get a Panasonic GH6 for its portability for shooting on the go. If the GH6’s IBIS is anything as good as the GH5 then thing should be looking up for that new model expected later this year.

Meantime we have the Panasonic Lumix BS1H Box Camera to talk about. For a few days at least. The juvenile in me might suggest being wary of things that come in a box.