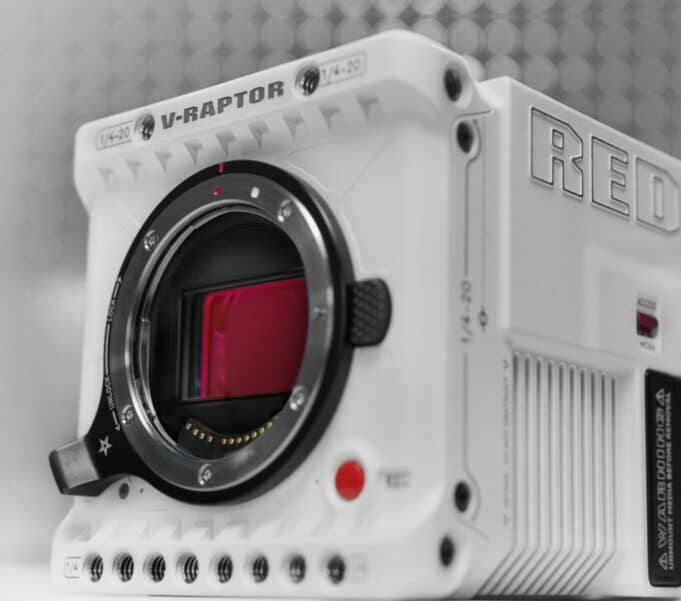 Update: Scroll down to the end for the first test footage of RED Raptor.

Update 2: And just like that the new Raptor is sold out. On the same day it was announced.

Update 3: Quick observation. There’s a change afoot I’ve been noticing wrt the cinema camera market. That is: less interest. Past new camera announcements from RED like the Raven and Scarlet-W used to blow up the forums — hundreds of pages of interest, questions, excitement. Not so much anymore. And this is not just a RED phenomena. It’s happening across the internet with all brands (Canon, Blackmagic, Sony, etc.). True, this is anecdotal evidence. However, I think the trend is towards the smartphone, especially the Apple iPhone. Meanwhile, camera manufacturers including mirrorless and cinema will face an increasingly niche market. But, you might ask, what about the above “Update 2” and Raptor selling out. Two thoughts: (1) It’s a phenomenal camera at a phenomenal price point for the film & TV industry who are most likely the primary buyers; (2) The limited production run likely means there was simply not many available, COVID-19 and all — many companies, especially tech, are operating in limp mode.

RED Digital Cinema today took the wraps off a new camera. The V-Raptor ST 8K VV shoots up to 8K video and sells for $24,500 USD.

Pre-orders are now open on the RED web site. Expected delivery times 3-4 weeks, though due to COVID-19 the company says those “estimates may fluctuate.”

RED also says the Raptor “is the most powerful and advanced RED cinema camera ever.”

Further it represents the first model as part of the new DSMC3 generation of cameras (the current line is represented by four DSMC2 bodies/sensors). 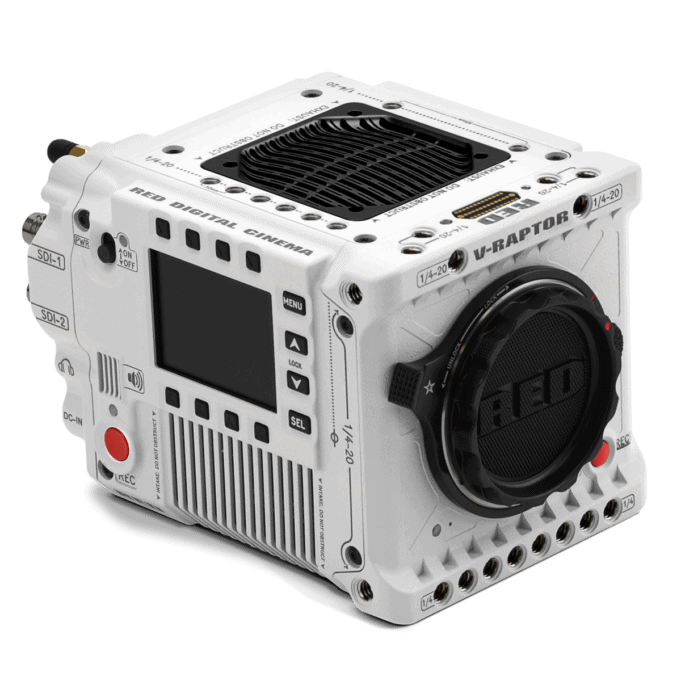 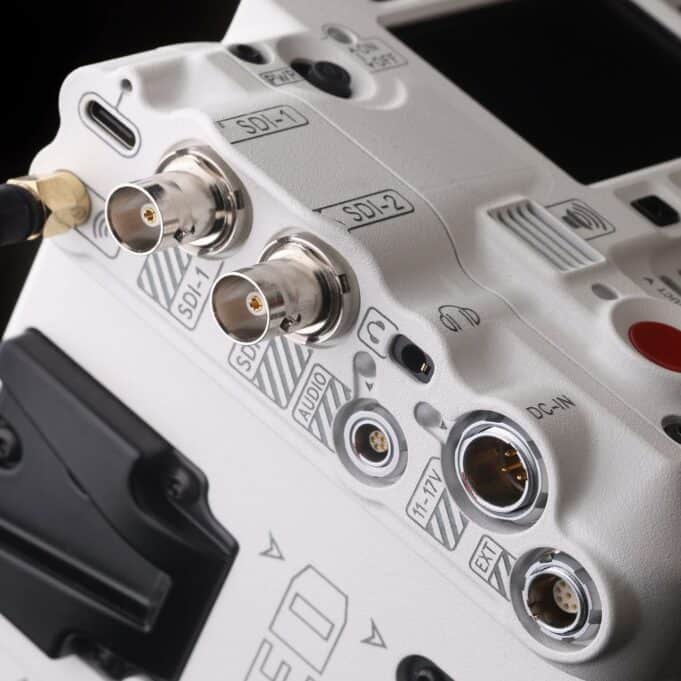 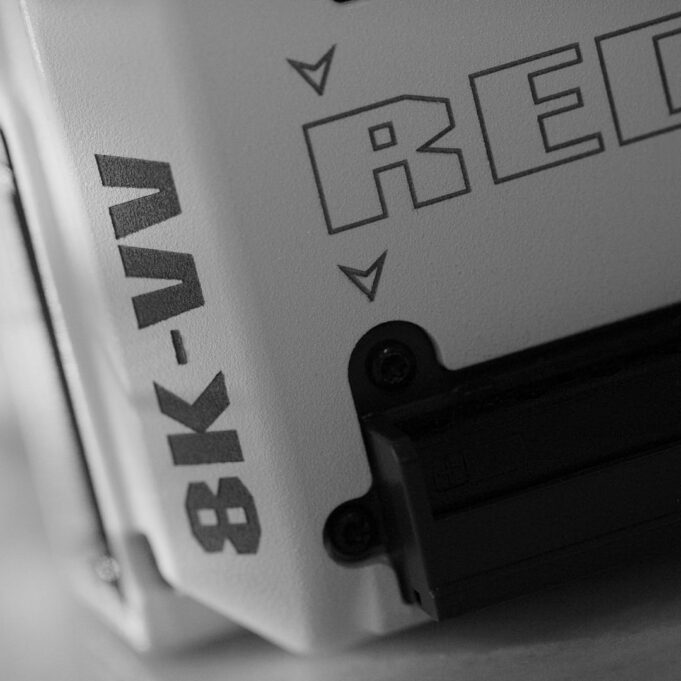 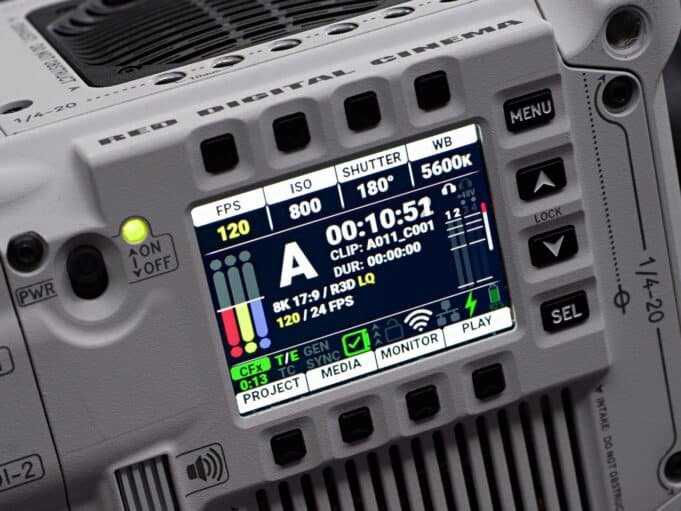 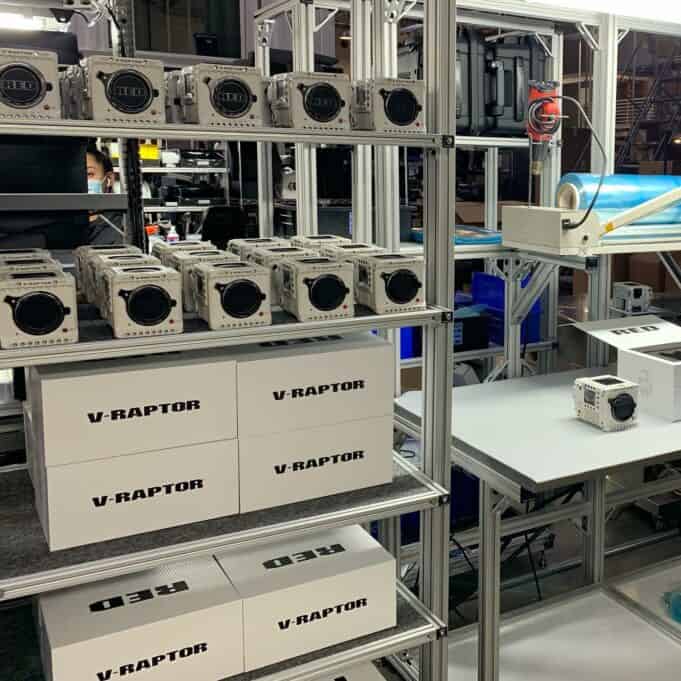 As we saw with the Komodo 6K camera this one too uses the relatively new (and popular) Canon RF mount, which opens up plenty of possibilities for lenses and mounts. In addition Canon makes an RF to EF/EF-S adapter with a built-in ND adapter which will be a perfect solution for many outdoor shooting scenarios.

Dynamic range is, once again, a show stopper. RED claims up to 17 stops with Raptor, with scan times 2x faster than any previous RED camera. This means shooters will be able to shoot up to 600 fps at 2K.

All of this comes in a compact package that weighs barely over 4lbs.

Included in the box:

RED better have their order management system on turbo mode.

This camera — odd name and all — is going to sell like crazy. I’m guessing Raptor will become RED’s all-time best selling camera. Pure speculation of course. But who could want for more in a professional grade cinema camera?!

So Raptor undercuts its previous God by a whopping 50% and change.

Better still, the frame rates on Raptor are insane. As in insanely good. Shooting up to 600 fps in 2K will be an instant buy for buyers who specialize in fashion film, extreme sports and other action- and slow motion-oriented markets such as music video production. You used to need to rent a niche, high-frame rate camera to achieve these sorts of results, but RED is quickly closing that gap.

Yes, there are many cheaper options out there that shoot 6K, 8K and 10K. But they’re not RED. And they don’t have REDCODE RAW, an industry standard in Los Angeles and across production houses worldwide. That CEO Jarred Land and his team opted to include a built-in LCD on the right side for camera control clearly indicates Raptor is first and foremost designed for crews — where an assistant or operator of some sort would be stationed to manage settings while on set.

It wasn’t long ago that RED’s entry level camera were around this price point. So the market is definitely evolving quickly.

As a RED DSMC2 Dragon owner (Scarlet-W), we don’t need a camera like this to shoot Stark Insider videos (but who can’t use a little Lars Von Trier slow-mo in their projects?). Of course not. But that’s not to say I don’t want to own one. I suspect many other DSMC2 owners will wonder if there’s going to be a trade-in program like the company has offered in the past (update: there’s no upgrade path. Fair enough, we’re living in tricky times and shipping/logistics are I’d imagine a burden on margins and staff). Truth be told though: every time I fire up the Scarlet-W I feel like I continue to get my money’s worth as I rack up the hours. I might just ride this one into the sunset.

Chef’s kiss, as they say these days, with V-Raptor is the ability to take advantage of full frame when needed (at 8K) or switch over to Super 35 for the classic cinema format (at 6K).

Despite this incredible value and feature set I have another prediction: the forums will light up with camera trolls wanting this feature or that feature. More, more, more! Because they surely won’t be able to unlock their creativity and get their project done without one more feature. Friendly reminder for all of us: filmmaking is about overcoming obstacles, solving problems on the fly. Jeez, folks, figure it out. No ND filter?! I’m guessing if you think hard enough you may find a solution.

In any case it’s pretty remarkable news and a feat that RED was able to pull this kind of camera out of the bag during a global pandemic, chip shortage and all.

RED V-Raptor Limited Edition is now available for pre-order on RED’s web site, starting at $24,500 for body only.

UPDATE: Well, here’s at least one key question answered, and a hint that demand is high:

With Jarred Land and the RED team in Irvine, California answering questions about the V-Raptor camera.

What does the V stand for?

Velociraptor. Though they say you’ll likely get a different answer depending on who you ask at RED. However, for trademark purposes they officially use V-Raptor.

Does Raptor have rolling shutter?

No. But its rolling shutter is 2x faster than Komodo. So from 16ms down to 8ms.

This is the #1 question they’ve seen. Not in this version. There’s an XL/Ranger version of V-Raptor coming later this year that will have ND filters, but it’s a much bigger body. There’s also a RF to PL mount solution in the XL version.

Is heating a problem due to its size?

It has a lot of room to breathe. A nice, quiet top fan. They’ve tested in Southern California heat by throwing a towel on the Raptor (do not attempt per Land) and it handles the stress well.

What’s the approximate batter life on a 98wh battery?

It’s not a Komodo and sipping battery. At 8K/120 Raptor will draw power.

Are you going to support the DSMC2’s anymore or not?

Of course. Of course!

DSMC2 are still very important cameras that will live on for quite some time.

Depends on the project. Product shots might be Super 35 for depth of field. For short films maybe full frame. With Raptor you get the choice and flexibility.

Very close to Monstro, but you really see the difference in the shadows in Raptor vs. Monstro. More organic, especially at high ISOs.

RED is based on Angel Bird with new controller. They’re the only ones that can sustain the higher data rates. These cards are why the cameras aren’t shipping out for a few weeks. “We are pushing things to the absolute limit,” says Jarred Land. “The cards are just fast enough to hold this data speed.”

Pre-record. Along with 8K/120 for wildlife stuff in Big Sur is “incredible.”

Any other codecs besides REDCODE RAW?

On the XL lens mount…

How about low light performance? 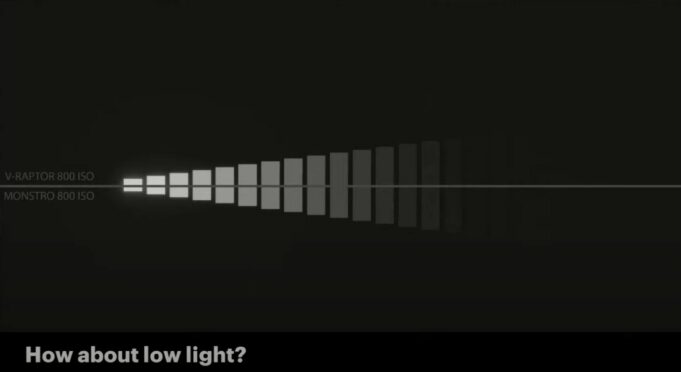 Will there be interchangeable OLPFs for the DSMC3 bodies?

There is a new OLPF stack.

Will a mount adapter be made for Gold mount batteries?

Yes. Also, there’s also a whole bunch of new accessories coming. For instance, there will be an XLR breakout adapter with a mount that can be placed almost anywhere on the camera: 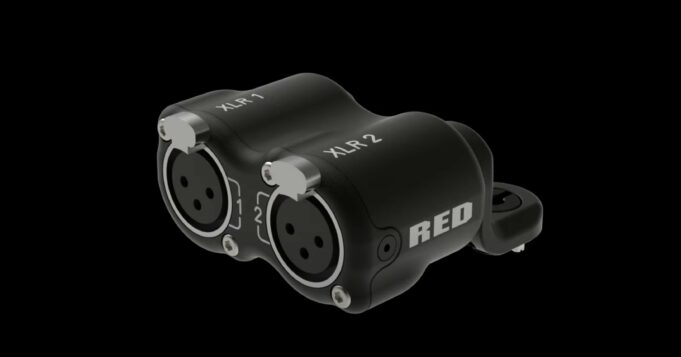 Will there be upgrade programs?

No. “It was really awesome to do that when we could,” says Land. “But the expenses and logistics cost almost as much as the camera. It’s unrealistic to sustain.”

Recommendation per RED: sell your camera second hand. Privately gives you a better return anyways. Just like a car.