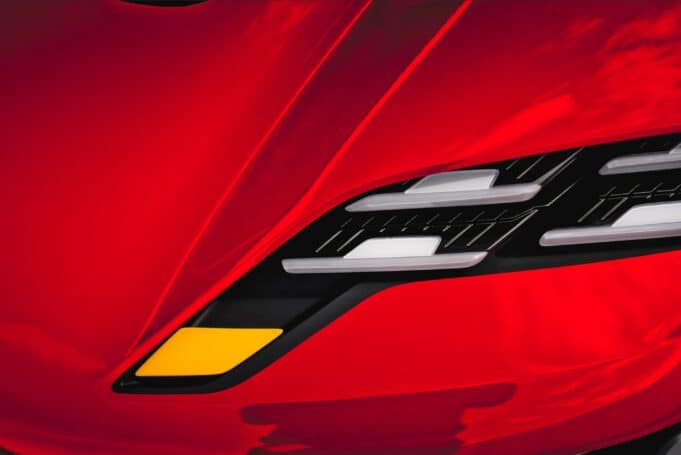 The official Porsche newsroom teased a cropped image featuring four close-up LED light strips that it calls a “future-oriented concept study.” What could it be?

Per the announcement — which was posted on Instagram and Twitter — a live reveal will take place September 6 on newsroom.porsche.com, as part of the IAA Mobility show in Munich.

Not much more information was provided, leaving most of the details to our imaginations. However, the headlight design, very much a boomerang as featured on the Porsche Taycan could point to an EV of some sort.

At @iaamobility, #Porsche is looking to the future, celebrating the world premiere of a future-oriented concept study on 6 September – live on https://t.co/e3Er20H448. #Porsche #IAA21 #PorscheIAA2021 pic.twitter.com/7gDaGQjG7d

One strong possibility: this could be a lower cost, entry-level EV sedan that would slot under the Taycan. That could mean a price range anywhere from, say, $70-80K USD which would match up competitively against the base Tesla Model S ($89,990).

It could also be a Maycan EV, though Autoblog thinks this will not be the case — and the apparently short hood in the photo above would seem to confirm that guess. They also point out that the #sportscar hashtag used in the tease could point to a two-door model. Maybe a 718 Boxster/Cayman EV?

In any case, we do know this will be a concept. So the actual timeline and final design of whatever the models turns out to be will likely be quite a ways off.

Taycan Precedent: Porsche is Really Good at this Concept-to-Production Thing

Based on the Taycan concept design and the resulting final production model I have to say Porsche is quite good at bringing its forward thinking vision to reality. Compare and contrast the Taycan concept and the 2020/2021 Taycan production cars and you’ll not see a dramatic difference. Other car companies often can’t deliver on radical designs. Compromise and disappointment typically follow, ultimately largely defeating the point of the initial hype and expectation.

Porsche is really kicking it into “gear.” Assuming this is an EV — and I think it would be crazy for it not to be given where the market is headed — Stuttgart is again taking it to the Italians who seem slow to embrace fully electric platforms. Lamborghini and Ferrari have showcased hybrid EV designs, but roadmaps seem far off, and we’ve yet to see the type of BEV-based commitment we’re seeing from Porsche. Not to mention fast execution. These early market moves could position Porsche well for decades to come in the high-performance, premium sports EV segment.