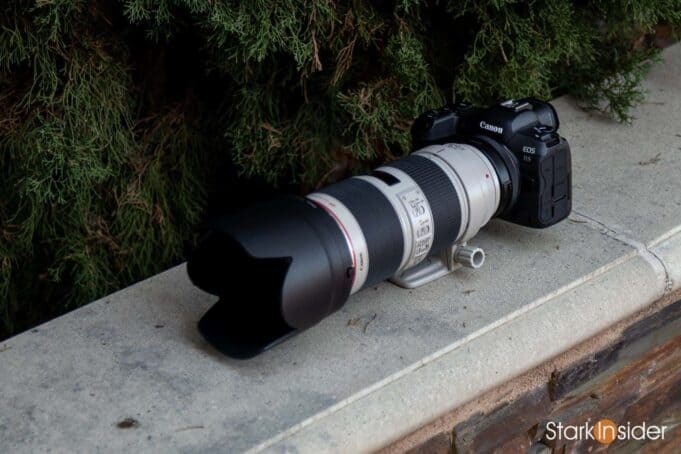 EISA (Expert Imaging and Sound Association) have released their annual awards list. You can read the entire list over at Stereophile. Be forewarned: it’s a long, comprehensive and somewhat exhausting list. Less isn’t apparently more in bestowing video and audio awards.

Notable entrants, at least from my photo/sound perspective here on Stark Insider, are a couple:

The Canon R5 is a favorite around here for high resolution stills. I use the full-frame camera mostly to capture photographs of Loni’s artwork (mostly oil on canvas). I need the ability to potentially blow up the RAW files for presentation on walls or in magazines/books, etc. A standard use case. With its 45MP full-frame sensor the R5 captures more detail than, say, a typical 24MP APS-C body. That’s handy for future proofing when building a back catalog of artwork archives. Canon released the R5 in 2020 to much fanfare. Many see it as the mirrorless update of the famed 5D DSLR series (latest being the 5D Mark IV). Although it clocks in at a hefty $3,899 USD price tag, that’s about the going rate for the professional market for this level of spec.

Other cameras garnering an EISA award include: Sony Alpha 1, Fuji X0S10, Nikon Z5, Fujifilm GFX 100S, Sony Alpha A7S… in addition to a bunch of lenses from the likes of Tamron, Sony, Nikon, Sigma, among others.

Hey, we’re in the middle of a pandemic. Awards for all! Why not?

Then again, sound and video are large markets with many segments, buyers and price points.

On to audio then.

The standout here is the Bluesound NODE. This is a compact “all-in-one” device for streaming music to your existing Hi-Fi system. For me at least this is an increasingly interesting space. With Apple announcing (free) lossless music and spatial audio this summer as part of its Apple Music service in addition to the pending Spotify HiFi coming some time in the back half of 2021, the focus on high-resolution music seems to be increasing. If still a niche, at least it’s getting more marketing, more exposure to would-be audiophiles. And the NODE is well suited to achieve the goal of streaming music (from providers such as Spotify, Tidal, Qobuz) at high bit rates. Essentially the device has two built-in functions: a music streamer, and a DAC (digital-analog converter). An amplifier is still required to connect to the audio outputs. Audiophiles traditionally would buy three “separates” to do this job (streamer, DAC, amp). However, for offices, and less critical applications buying this $549 compact and rather tidy box brings a high level of convenience and ease-of-use.

Other audio devices receiving an EISA award — and requiring a much, much thicker wallet include: HiFi Rose RS150, Cambridge Audio DacMagic 200M, and turntables from Pro-Ject Debut Pro and Thorens TD124 DD, among so many others.

Winning an award of course isn’t the end all, be all when it comes to making a buying decision. But shoppers in the market for up-level kit may want to at least scan the list for ideas.

The plethora of up-and-coming Chinese manufactures.

No where to be found here. To be clear I’m not referring to the devices being manufactured in China. Most on this list are. I’m talking about designed (and manufactured) in China.

As I’ve keenly studied this space over the past few months — while building a hi-res “head-fi” for my office to listen to Qobuz and Tidal on headphones while working, and a DIY Raspberry Pi 4 music streaming solution for the existing family room stereo — I’ve discovered an explosion of intriguing Chinese players. Companies I’ve never heard of before, like Gustard, Topping and SMSL. To name but a few of this wave of new entrants into the entry Hi-Fi market. These companies are pumping out products that measure well from an engineering perspective using precision test equipment (see Audio Science Review for technical reviews), but are also reasonably, if not exceptionally, well priced. They are, quite simply, undercutting the traditional competition. Which, by chance, features a lot of companies out of Europe and Britain, with a somewhat smaller lot based out of the United States.

It seems to me at least these new upstarts represent a serious threat to the establishment.

So maybe it’s not surprising that I don’t see them covered much in the traditional audiophile press, web sites, and magazines.

Interestingly, when it comes to forums and YouTube, companies like Gustard, Topping and SMSL among dozens of others do get significant coverage — not to mention enthusiasm.

I can see why.

My desktop listening station cost about $588 USD plus tax ($359 SMSL SU-8s DAC decoder + $229 SMSL SH-8s headphone amplifier) . Not bad for a relatively high powered system (for headphones) that can decode Hi-Res music streams (up to 32-bit/768kHz) and also decode the MQA codec used by Tidal. Listening to this setup using Roon to integrate everything on the software side on my trusty and slightly beaten up Sony MDR-V6 phones is nothing short of a revelation. Just mind blowing sound quality. And to think this type of system would likely have costed far more, if not thousands, even just a few short years ago.

In any case, lots happening in the lossless and Hi-Res audio space, and the market appears to be moving at lightning speed. I’m all for that. There’s been too much dawdling in the past, and I suggest maybe a bit of plain old snobbery that gave the whole audiophile name a somewhat distained reputation. So I say: hi-res music for all, yes please!

Per Stereophile, EISA is “is an organisation representing 60 of the most respected special interest publications and websites from 29 countries that cover Hi-Fi, Home Theatre Video, Home Theatre Audio, Photography, Mobile Devices, and In-Car Electronics.”

From what I can tell the awards ceremony is typically held in-person at the IFA show in Berlin, and for reasons I suspect we all understand too well is listed as “TBA” on the EISA web site.