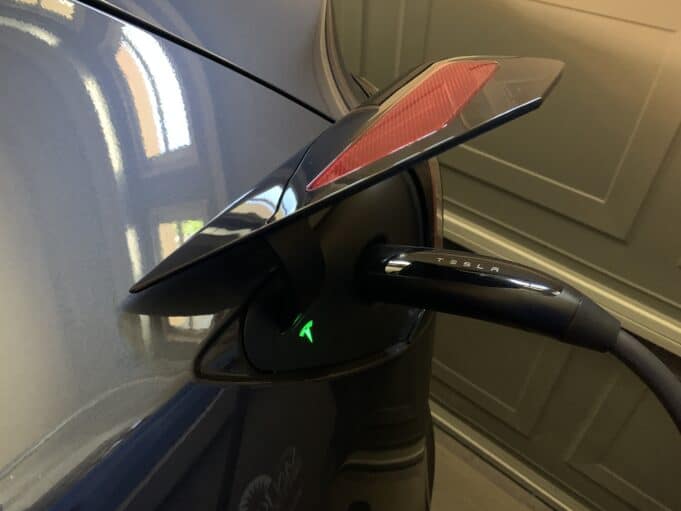 And when it comes to Tesla delivery numbers there always seems to be room for more, at least in the eyes of analysts.

That’s the funny thing about tracking a company like Tesla.

If you come at the Q2 announcement of over 201,250 cars delivered in the quarter as amazing considering it represents about 120% y/y growth and breaks the record for Tesla then you can’t help but think this is good (great) news.

Note: below is the official statement from Tesla IR: 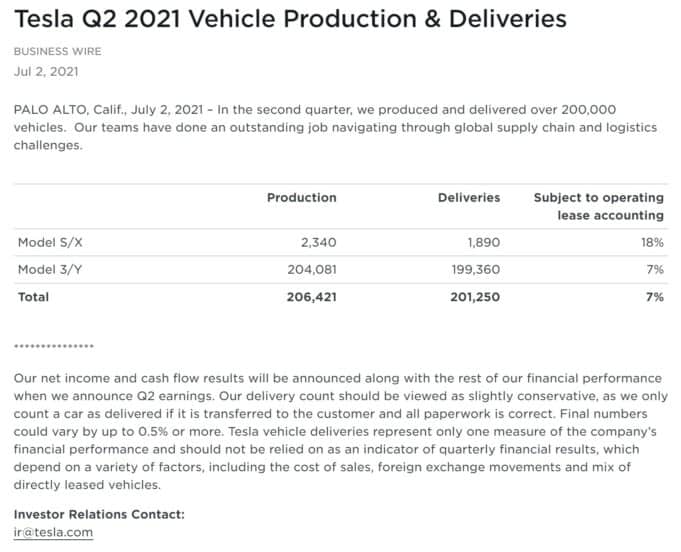 However, if you’re a Wall Street analyst with lofty expectations and perhaps a bit of a glass-half-empty perspective in terms of Tesla’s future then you might be seeing this as a bit underwhelming and bad news.

So which is it? Good news? Bad news?

I guess it really depends on your perspective.

Tesla is a high growth company. Consequently the stock carries a high valuation, representing a pitch perfect future in terms of revenue, income, deliveries and execution. Investors are awarding a premium for those considerations, and more. The slightest hiccup results in significant press coverage, for better or worse.

As a mere observer — and a representative of one of the delivery figures for Q2 in the form of a MSM 2021 Model Y LR — I find tracking a company like Tesla to be a rollercoaster-like experience.

Living here in Silicon Valley for a few decades though does temper things. We’ve seen these hyper growth stories before. Boom. Bust. Boom. Repeat. I’ve lived through the dot-com 2000/2001 crash (remember Economy 2.0?!), the 2008 real estate crash and, most recently, the March 2020 crash caused by the pandemic and the COVID-19 virus. Yet, long term, the market, and the innovative companies and people that fuel them tend to, for the most part, persevere and succeed.

The thing about  Tesla is that it seems to engender extreme loyalty (dare I suggest even cult-like). Tesla owners remind me somewhat of Peloton owners. They just can’t stop raving about the product experience. And, further, they will do anything and everything they can to share the excitement. Let me show you my Tesla! Look at the app! Let’s go for a ride!

Having experienced a home delivery of a Model Y earlier this week I think I’m beginning to understand the reasons behind this sort of euphoria.

First, having car delivered to your driveway with no contact is truly convenient (there’s a pre-paid Fedex envelope inside to complete DMV paperwork). Tesla texts you the car is delivered. You go outside, open the Tesla app, unlock your new car and off you go.

Then there’s my early experience with Tesla Mobile Service.

We purchased the optional Homelink garage door opener. To have it installed you book an appointment using… the Tesla app. A few days later we had a friendly technician at our driveway, already working on the installation without even knocking on our door. Again, communication is handled via the Tesla app. About 20 minutes later the work was complete, and, once again, we didn’t need to drive the car to a dealership or service center.

Just today I entered a service request to replace the 2 keycards that come with new Teslas as they were warped (apparently from storage in a hot location). They responded quickly and confirmed an appointment via the in app messaging to drop them off next week. We suggested dropping them in the mail to save time & money, but they insisted to just dropping them off at our home. None of this matters too much anyways as we use our iPhones as keys which works really well.

But above all else, my early Tesla experience is really comes down to two things.

Everything I’ve read about EVs and Tesla is spot on when it comes to the driving experience. The torque and near instant power is intoxicating. The lack of engine noise is a real treat when commuting in the heavily congested roads of Silicon Valley including rush hour slogs known as 280, 101, 680 and 880.

Charging at home is an exotic new normal. No more gas stations. Just top off when needed past midnight when PG&E rates are cheaper. And if you’re a data geek like me, you’ll want to download as many third party Tesla apps as possible and track your savings, mileage, and metrics galore.

Of course, you’ll also want to be able to open your frunk using your Apple Watch.

Tesla takes EVs to the next level with unprecedented user experience.

The second half of my Model Y ownership so far is germane to Tesla itself.

For instance, Loni was able to stream Taylor Swift using the intuitive touch screen faster than I could say You Need to Calm Down. I’ve never seen her do that in any other car… ever. Infotainment systems of yesteryear are a certain breed of hell.

Ease-of-use continues to the entire experience of “setting up” driver profiles. The interface walks you through the basics, and even includes short tutorials. Simple.

Activate cabin overheat protection and Tesla will keep your interior from going over 105F when parked — handy for increasingly hot California afternoons.

Sentry mode, as has been widely advertised and seen on incidents shared on YouTube, conveniently monitors the perimeter of your car using an abundance of cameras and records footage to a small USB drive in the glovebox.

Full Self-Driving is an incredible innovation. Is it really fully autonomous? No. Far from it. I think Tesla does a bit of a disservice by calling it that. Still, the technology behind FSD is staggering. Tesla has a massive head start. Imagine the data it is collecting to build its neural network and machine learning capabilities. I believe it’s far ahead of the competition. In time I expect the technology to improve exponentially and eventually be worthy of the full self-driving moniker, as robotaxis flood the streets.

One pedal driving is a revelation worth noting. Not using the brake pedal does take some practice. You need to be ever gently on the accelerator. Regenerative braking takes care of the rest. After a few days it seems like it’s the only way to drive a car.

Yes, I’m enjoying the Tesla experience, and tracking the company. But I’m a fan of the EV industry as a whole. I love what Ford has done with the Mustang Mach-E, and the upcoming F-150 Lightning (that will sell like crazy). And I’m cheering on the upstarts like Rivian, Fisker, and Lucid Air. Same too for the efforts of the established players like VW (ID.3/4), Porsche (Taycan, upcoming Macan), Renault (ZOE city car), Hyundai (Ioniq), Kia (Niro), Volvo (Polestar), Chevy (Bolt) and GM (Cadillac LYRIQ), among so many others. Because moving the whole industry away from the combustion engine is a good thing.

In any case that was a bit of a segue. All to say that when Tesla smashes its delivery numbers for the quarter you’ll always see two sides to the story. Ultimately it might come down to those who believe that Tesla will continue to innovate and effectively compete long-term in the EV space versus those who believe Tesla is benefitting from a head start, but will eventually fail, especially when faced with auto companies who have already been doing this at scale for decades (then again I’d point out that’s for ICE cars, not for EV cars).

CEO Elon Musk does bring some of this upon himself and the company. Then again if you want to move mountains you don’t worry about a bit of sand in your shoes. Or something like that.

Expectations are high, and every little bit of data and information — financial or otherwise — is scrutinized and debated. Which makes this sort of a 21st century blood sport perfectly suited for Twitter.