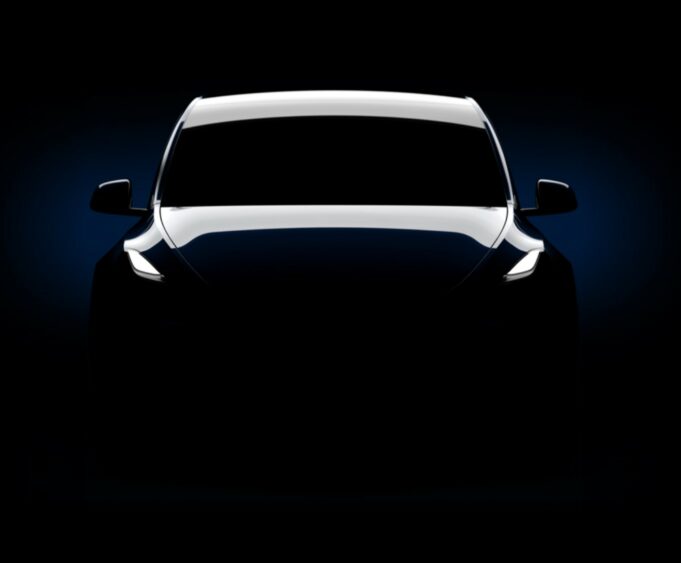 Update 5.28.2021: Here’s a video test of a radar-less 2021 Tesla Model Y (embed below) as mentioned in Does Tesla Autopilot work differently with the radar removed? (insideevs.com). Those such as myself awaiting a VIN and Y delivery and concerned about how Autopilot works without radar might want to watch. Spoiler alert: it works fine with no issues… at least in good weather. Still need to see tests in rain, fog and snow. As expected Autopilot is limited to 75mph. Also, Emergency Lane Departure Avoidance is not available — with a note in small print indicating it will be enabled in a future software release. One limitation shown during the test is that without radar it seems Tesla Vision cannot see two cars in front (or it could be that it simply does not show this information on the visualizer). In other words it can’t see further than the car immediately in front or your Tesla. Or so it seems in this test so far. And it seems to depend on the sizes of the vehicles as well.

Tesla is once again having an interesting quarter.

First we heard the news that the EV maker had sold out Q2 (April-May) production of its cars in the first month of the quarter. Demand, it seems, remains strong.

Then, most recently, among other headlines Tesla announced it was apparently fast tracking its new Tesla Vision system.

Further CEO Elon Musk confirmed it would be dropping radar for Model 3 and Model Y cars shipped from May 2021. That means less cost (how much and if it’s material I have no idea), but it also means Tesla’s Autopilot and Full Self-Driving (FSD) systems would need to now rely solely on the car’s various built-in cameras. And forgo any ability to rely on radar sensors.

Earlier this week Tesla posted a blog post on its support site, “Transitioning to Tesla Vision” that had this to say:

“Beginning with deliveries in May 2021, Model 3 and Model Y vehicles built for the North American market will no longer be equipped with radar. Instead, these will be the first Tesla vehicles to rely on camera vision and neural net processing to deliver Autopilot, Full-Self Driving and certain active safety features. Customers who ordered before May 2021 and are matched to a car with Tesla Vision will be notified of the change through their Tesla Accounts prior to delivery.” 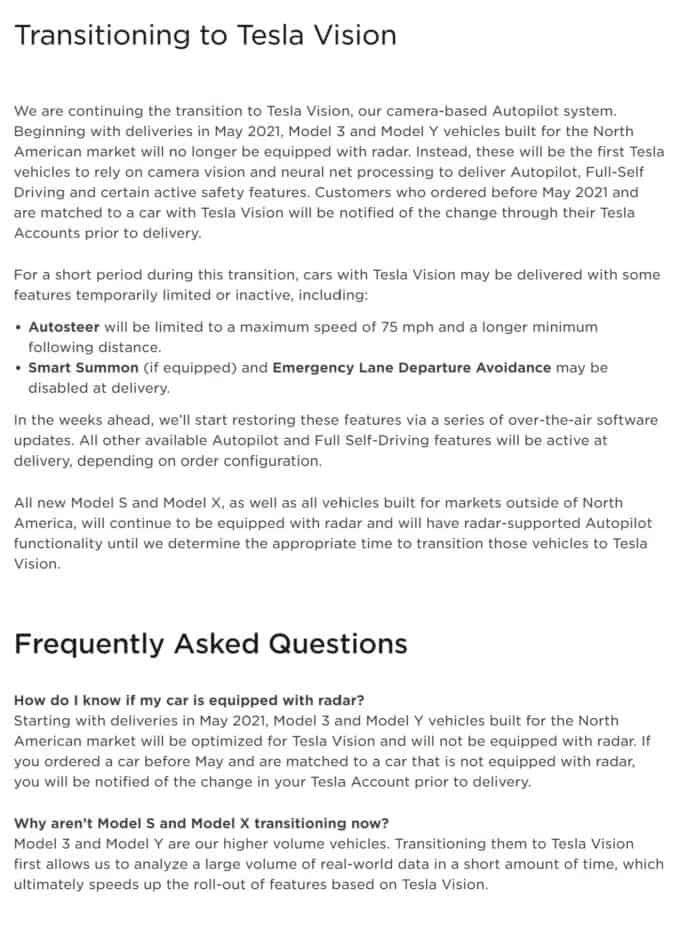 As a Model Y buyer (April) I’ve followed this series of news and announcements and debates quite closely.

Like many I wonder if my Tesla will be better or worse without radar. It seems to me, and others who have commented on various forums and Reddit, that an autonomous system would be better if it had more sensors to rely on — whether they be radar, cameras or lidar, etc. If a camera is blocked, by rain or snow, for example, then there’s radar as a backup to see through it all.

But there’s a counter argument that seems to go something like this.

As humans we rely on our eyes (vision) to drive. That works well for most. Look at professional race car drivers. They rely primarily on their eyes to monitor the track and make split second decisions. If an algorithm, based on a neural network, can be created to leverage multiple cameras (i.e. multiple sets of eyes) and artificial intelligence that draws on the massive amounts of data that Tesla is creating that surely should make for the ideal way to approach the self-driving/Robotaxi challenge. In a sense this would be the penultimate set of eyes connected to an uber supercomputer. Further, a single camera-based system completely eliminates the need to make a decision when a conflict happens between a camera and radar readout. In any case, it seems Musk and company have already stated that the camera would win and be the more reliable choice in such a situation.

So it seems certain my Model Y will not have radar sensors when it ships in June.

Apparently because of the chip shortage my guess is that the radar supply chain had hiccups. That resulted in an acceleration of an existing plan to shift to a camera-based Tesla Vision system. Software needed to be re-written. To make its Q2 delivery estimates Tesla was forced to temporarily switch off some FSD features such as Smart Summon to enable a quick roll-out of updates to Model 3 and Model Y cars sitting in various holding spots.

That means I, along with many others, will be a sort of beta tester of this new Autopilot and FSD software update.

Many say, however, that we’re all just beta testers in any case — ever since Tesla introduced the Model S way back when. These are still the early days. And we need to live with that reality.

Ultimately I had to make a decision: do I keep my MY order, or cancel and wait and see how all this Tesla Vision/Camera/No-radar thing turns out.

There’s a chance some suggest, for instance, that if there’s so many issues with getting the radar-less cars right that radar could be re-introduced in 2022, making the 2021 a special “non-radar” variant that may lose value on the secondary market.

I doubt that will happen. Elon Musk lands rockets, re-invents industries. I don’t think  those monumental, outsized achievements happen with a baby step approach, or one that covers bets.

I’m no expert obviously and my observations are merely as a Model Y buyer who is interested to know how this will impact the product when I finally take delivery. Take this for what it is.

Nevertheless, based on everything I’ve read to date, I’m sticking with my Tesla Model Y order. 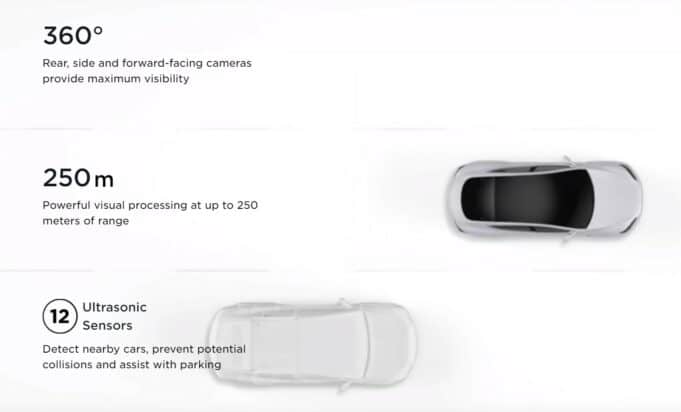 If any company can crack the autonomy equation I believe it’s Tesla. They are just so far ahead in terms of AI and data collected over the years that the engineering teams surely have huge competitive advantages. Will Tesla Vision work out of the gate perfectly? No way. It’s a software product. How many app updates does your iPhone or Android get every day? Chances are there’s many, possibly dozens. That’s the nature of code. It evolves and improves over time. So too will the new Tesla Vision system. It’s just going to take some time.

Meantime, as I await my VIN and text message that the Model Y delivery is ready (at the nearby Fremont factory) the camera vs. radar debate rages on. Wouldn’t you know it: as always the Internet is apparently chock full of experts. Blood sport indeed.

I’m just looking forward to enjoying the transition from my ten-year-old Prius, however reliable and efficient, to a modern-day EV. No more smog checks. No more gas stations. No more oil changes. I can live with that, even without radar.