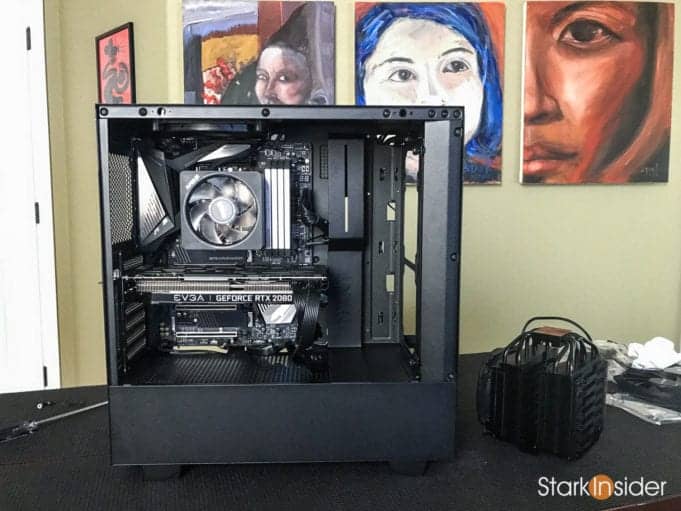 AMD is launching new Ryzen 5000 processors on November 5, 2020 and it’s cause for celebration. At least for us video editor peeps (and no doubt gamers).

I spend a lot of my life in the Creative Cloud. That would primarily be Premiere Pro for editing Stark Insider video projects. But also quite a bit of time with Lightroom, Illustrator and occasional After Effects (too complicated for me!).

Last year I did the unfathomable: I switched from Intel to AMD CPUs for my editing builds.

I like to roll my own, and have been doing so for all my life. Every 3-4 years, I rip out my desktop and build a new one from the ground up. Amazingly little has changed since the days when I worked at a computer store in downtown Ottawa called Mr. Diskette (with a happy floppy disk as the logo no less). You get a case, throw in a power supply, motherboard, and add some memory, hard drives, graphics card and you’re pretty much good to go. The fundamentals are basically the same now in 2020 as they were when “PC Compatibles” first hit the scene.

Then, and up until about a year ago, I’d always — always — go Intel. The gold standard. Or, was the gold standard. I knew Intel chips ran relatively cool, had minimal power draws compared to the competition, and though pricey, were generally decent investments. Every three years or so I could count on about 20-25% boost in processor performance. This in turn translated into better timeline performance when editing in Premiere, and faster export times.

I was skeptical at first. But everyone was raving about AMD, especially Threadripper. After reading the reviews and hemming and hawing I decided to take a chance with my 2019 build.

Threadripper was still a little too pricey for me. And I liked that the more consumer-oriented Ryzen 9 line-up had about the same power draw as my existing Intel chip; about 105W. When I’m writing articles or just surfing I prefer to have a CPU that’s not ratcheting up the electricity bill.

Man, the new AMD build has been a revelation. Incredible performance thanks to 12 cores. Surprisingly, my editing build runs quiet. I opted for fan cooling, and replaced the standard issue fans in the NZXT case with bequiet! Silent Wings (just do it). Then I dialed in custom fan curves based on CPU temps. Most of the time the fans remain silent. Only occasionally gently whirring up when I’m encoding a special effects heavy sequence in Premiere.

All this to say, if you’re looking at a new video editing build — a cost-effective one based on Windows 10 — then you really ought to shortlist AMD Ryzen or Threadripper processors. The hype, as I’ve discovered, is real.

As I come to the end of a major editing project with 3 Days in Iceland, I’m grateful I could edit on such a fast machine. I can’t imagine how I could get away with so much Warp Stabilizer and Twixtor with my old computer and still have my (in)sanity intact.

On November 5, AMD will launch its next generation 5000 series Ryzen chips. I’ll be watching closely. Thankfully, the Ryzen 3000 is based on the AM4 motherboard socket, and these new chips are fully compatible. That means if I want — if any of us Ryzen 3000 users want — to upgrade to a faster processor (say, the Ryzen 5950x) we can do so without, mercifully, doing a full motherboard swap.

Say what about Moore’s Law again?

Full disclosure: my wife, Loni Stark, works for Adobe. But I’ve been using Premiere — for better or for worse — way before I met her, and way before Warp Stabilizer (and Optical Flow!) ever existed.